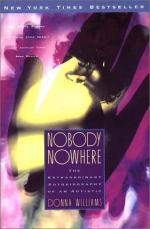 Nobody Nowhere: The Extraordinary Autobiography of an Autistic Summary & Study Guide

Donna Williams
This Study Guide consists of approximately 26 pages of chapter summaries, quotes, character analysis, themes, and more - everything you need to sharpen your knowledge of Nobody Nowhere.

Nobody Nowhere: The Extraordinary Autobiography of an Autistic Summary & Study Guide Description

Nobody Nowhere: The Extraordinary Autobiography of an Autistic Summary & Study Guide includes comprehensive information and analysis to help you understand the book. This study guide contains the following sections:

This detailed literature summary also contains Topics for Discussion and a Free Quiz on Nobody Nowhere: The Extraordinary Autobiography of an Autistic by Donna Williams.

"Nobody Nowhere - The Extraordinary Autobiography of an Autistic" is the story of the struggle by Donna Williams to leave the "world" she had created in her mind and enter into the alien "real world." The title is based on her own mother's assessment of her that she was "nobody" and had "nowhere" to go. Beginning life in an existence in which there was only a white field filled with billions of tiny dots, her battle was one which proved to be lifelong but ultimately life-changing.

Donna's parents thought that Donna's behavior was eccentric. Her caring father was hopeful that she could change while her cruel and abusive mother called her "crazy" and "mad." Her older brother joined in their mother's favorite pastime, calling Donna a spastic or a moron. Donna's physical health as a young child was revealing. Her gums bled, she bruised easily, and she was ashy white. Her parents suspected leukemia and took her to the doctor who found that the child did not have the cancerous blood disease. Many years later as an adult, Donna found that she had multiple food allergies. There is some research that indicates such allergies can contribute, if not cause, some degree of autism.

Even though she had to face the strong headwinds of poor physical health, abusive relatives, and existence in her strange world, Donna was intelligent enough to do fairly well in primary and high school. She even was able to attend a university where she did well, especially in classes that did not require a strict adherence to laws and rules, such as math. It is obvious that Donna was a highly-functioning autistic.

Like all autistic children, Donna created ways to cope with life as she knew it because she lacked conventional and inherent coping skills. When she felt in danger, she would summon up "Willie," a violent creature of her imagination who would protect her when she felt in danger. A young girl named Carol brought Donna home with her one day, like a stray cat. She was so taken with Carol that she invented a "Carol" persona of her own who would laugh and smile and be socially acceptable. She would use Carol when social events or relationships were impossible for Donna to deal with.

Donna went through a series of relationships. Something within her wanted a friend and even a best friend, although she herself did not know how to be one. She had several boyfriends most of whom took advantage of her vulnerability and sponged off of her or used her in other ways. She did meet several young men who had some of her same characteristics and who truly cared for her.

Donna put her life story on paper and conducted wide-ranging research about autism. Writing such a book, organizing information, and conveying the account of one's life and its struggles, would be a monumental feat for any individual. However, completing such a task for a person with autism it is nothing less than a miracle.

More summaries and resources for teaching or studying Nobody Nowhere: The Extraordinary Autobiography of an Autistic.

Nobody Nowhere: The Extraordinary Autobiography of an Autistic from BookRags. (c)2022 BookRags, Inc. All rights reserved.