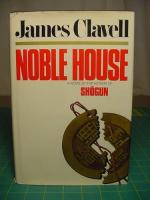 This detailed literature summary also contains Topics for Discussion and a Free Quiz on Noble House: A Novel of Contemporary Hong Kong by James Clavell.

Noble House is the continuation of James Clavell's exciting story of the biggest and most important trading house in Hong Kong. The original tai-pan devised a list of promises that all succeeding tai-pans must swear to uphold. Now a new tai-pan, Ian Dunross is to be sworn in and he also is expected to swear to uphold the pledge.

The continuing story of the Noble House, Asia's biggest trading company, is as exciting as in the previous novels. The new tai-pan faces many problems that his predecessors faced along with involvement with Chinese spies, a Russian spy ring, drugs and arms smuggling, and now stock market manipulations. Ian must uphold the legacy of Dirk Struan, the original tai-pan and honor the oath that all tai-pans must swear to uphold. He also inherited the legacy of intense rivalry and hatred for Quillan Gornt and his rival company.

Unlike previous tai-pans, Ian Dunross has taken the Noble House public. This makes the company a target for corporate raider Linc Bartlett and his associate Casey. Bartlett makes deals with both Gornt and Dunross and backs Gornt's short-selling in a stock attack on the Noble House. Much of the novel involves Ian trying to find the money to save his company during a period of runs on the banks in the colony.

There is also suspense and intrigue throughout the novel which takes place over the course of a little more than a week in time. There is the kidnapping of John Chen, the murder of the Russian Voranski, the espionage of the Chinese spies and the Russian spies as the authorities try to find out who is Arthur, the head of Sevrin, and who are the high placed members of the ring. There is also an incident of gun smuggling, links to the Mafia and a meeting of the drug bigwigs in Macao. Since many of the authorities are also involved, it becomes rather confusing. There is also a love angle in the book with the relationship between Casey and Linc and Linc and Orlanda.

Even though the book is long, over eleven hundred pages, it is hard for the reader to put down. Clavell's book is recommended reading for people who like novels with suspense and action. The book is available in one or two volumes due to its length but it is worth the time invested in reading.