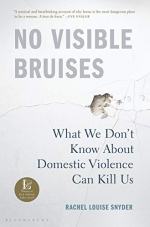 Summary
+Chapters Summary and Analysis
Preface
Part 1: Little Lunatics - A Bear Is Coming At You
Part 1: This Person You Love Will Take Your Life - And What Happens Next
Part 2: Penance - Clustered at the Top
Part 2: The Haunting Presence of the Inexplicable - Those Who Break
Part 3: In the Cracks - Grace Under Pressure
Part 3: Chambering a Round - Author's Note
Important People
Objects/Places
Themes
Styles
Quotes
Topics for Discussion
Order our No Visible Bruises Study Guide

Rachel Louise Snyder
This Study Guide consists of approximately 55 pages of chapter summaries, quotes, character analysis, themes, and more - everything you need to sharpen your knowledge of No Visible Bruises.

The following version of the book was used to create this study guide: Snyder, Rachel Louise. No Visible Bruises: What We Don't Know About Domestic Violence Can Kill Us. Bloomsbury, 2019. Amazon Kindle Ebook.

In the Preface, Snyder introduces Paul Monson and the story of his daughter Michelle whose husband Rocky murdered her and her three children before killing himself. Snyder then writes about how she came to research and write about domestic violence after an established career as an international journalist. Snyder frames domestic violence as an urgent public health problem that needs to be addressed. Furthermore, we need to question and challenge our societal assumptions and misconceptions about this issue in order to better support victims and potentially reform abusers.

In Part One, Snyder addresses the question that many people have about domestic violence: why do victims stay? Through the personal story of Michelle and Rocky, combined with research and interviews with experts in the field, Snyder explores the escalation of Michelle's tragedy while also outlining the reality of what it's like to be in her kind of situation. Rocky is an example of an abuser who exhibits both physical violence and coercive control, isolating Michelle from her family and ensuring that she will be financially dependent upon him. Snyder also emphasizes how societal structures failed to project Michelle, with an emphasis on Rocky's quick release from jail after she pressed charges against him. Snyder explains that victims stay with abusers, side with them in front of police or lawyers, and even recant their testimony because they fear for their lives. They do not do so because they are unaware of the danger they are in or because they do not want to leave. Rather, they feel they have to appease their abusive spouse because they are living with a person who they know may kill them. Supporting victims means asking what we can do to support them, not why they are seemingly choosing to stay in a bad situation.

Part Two looks at the root of gender-based violence in society and explores whether and how it is possible for a violent person to become nonviolent. This specifically addresses the violence perpetrated by men against women and children, as this is the vast majority of domestic violence cases. This section examines how a culture of toxic masculinity and ingrained patriarchal/misogynistic gender expectations contributes to a social epidemic of gender-based violence. It also explores how abusers are often part of a cycle of violence, often having experienced abuse themselves. Snyder looks at the prison system and how its culture of violence fails to reform abusers. As options for batterer intervention, Snyder investigates several programs in detail including ManAlive, Emerge, and RSVP, which seek to reform abusers, both inside and outside prison walls. Snyder outlines both the successes and the failures of these programs with case studies from her experience as a researcher-observer.

Part Three discusses the various systemic changes that are currently being enacted or that have been put in place over recent years to better support and help victims of domestic violence. Snyder writes about the importance of breaking down barriers in communication between various departments including the police and the crisis center. Other important initiatives include the establishment of multi-disciplinary domestic violence high-risk teams, alternatives to shelters for victims, and bail restrictions for abusers that allow their victims the time they need to put a real plan in place for their safety. Snyder spends time with a Cleveland police officer, Martina Latessa, who specializes in domestic violence cases, and witnesses a case study in how this kind of dedicated victim support from law enforcement can work. In her conclusion, Snyder emphasizes the importance of communication in reducing domestic violence. She cautions against the dangers of the contemporary rise in misogyny and patriarchal values while also outlining the various systems and people who are working hard to affect real change for victims and their families.

More summaries and resources for teaching or studying No Visible Bruises.