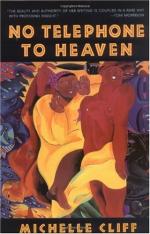 Michelle Cliff
This Study Guide consists of approximately 37 pages of chapter summaries, quotes, character analysis, themes, and more - everything you need to sharpen your knowledge of No Telephone to Heaven.

No Telephone to Heaven Summary & Study Guide includes comprehensive information and analysis to help you understand the book. This study guide contains the following sections:

This detailed literature summary also contains Topics for Discussion and a Free Quiz on No Telephone to Heaven by Michelle Cliff.

This short poetic novel explores racial tensions between blacks and whites from two perspectives, that of a light skinned black woman and a darker skinned black man, each of whom internalizes the negative attitudes of whites and responds to them with violence. With a narrative that is fluid and rich in metaphor, the novel explores themes related to the nature of motherhood and of home.

As a rickety truck makes its way up a rain-soaked mountainside with a cargo of people and weapons, the novel begins its journeys back and forth through time and place. In both narratives, the focus is on a light skinned black woman named Clare. As she rides up the mountain, she reflects on her life to this point and how she became a revolutionary in the cause of Jamaican black rights.

Clare's narrative is paralleled by the story of a black man named Christopher who grow up poor in the slums of Kingston. His near-psychotic rage and frustration drove him to kill the upper-middle class family for whom he worked. Narration eventually reveals that although he remained at large and never faced legal consequences for his crimes, his mental state deteriorated, to the point that he becomes a familiarly, safely insane figure on Kingston's streets.

For her part, Clare's story begins with her parents, Boy and Kitty, and their decision to leave Jamaica for what they believe will be a better life in America (a decision triggered in part by Christopher's killings). The lighter skinned Boy is determined to put behind the inhibiting, violent racism he encountered in Jamaica, but when he discovers that similar racism is also prevalent in America, he does everything he can to make his family as white as possible. Kitty, however, feeling abandoned in her blackness, subversively tries to both maintain and defend it. She eventually leaves her husband and one daughter (Clare) to what she thinks is the white-defined life they want. Clare, however, discovers that she doesn't want to abandon her racial identity in the way her father has taught her, and so leaves for a journey of self-discovery and affirmation.

Clare's journey takes her first to England, where she loses herself in the study of ancient cultures and becomes friends with a fellow academic who, to Clare's disappointment, eventually reveals herself to be as racist as so many of the other people she has encountered. She abandons her studies and travels through Europe in the company of an expatriate American soldier who was wounded in Vietnam. She becomes pregnant with his child, but miscarries. Shortly afterward, the soldier abandons her and she finally returns to Jamaica. There she re-encounters an old friend, once known as Harry but now known as Harriet after a self-castration. Harriet introduces her to the world and the battles of a group of Jamaican revolutionaries, leading Clare to realize this is an opportunity to follow through on the altruistic ideals of both her mother and grandmother.

The stories of Clare and Christopher intersect again late in the novel when Christopher (now known simply as The Watchman) is hired to portray a "wild native" in a film about blacks being produced and shot by whites in Jamaica. Clare, Harriet, and the other revolutionaries plot to sabotage and/or disrupt the shoot. The lives of both Clare and Christopher, as well as those of the other revolutionaries, are ended when the police, apparently alerted by a traitor to the revolutionary cause, strafe the trees and bushes around the setting for the shoot with gunfire. Clare's last moments are portrayed as being filled with memories of the Jamaican language. Narration concludes with a reference to day breaking.

More summaries and resources for teaching or studying No Telephone to Heaven.

No Telephone to Heaven from BookRags. (c)2022 BookRags, Inc. All rights reserved.