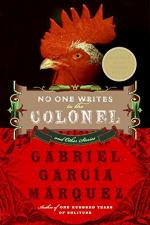 Related Topics
Chronicle of a Death Foretold
Collected Stories
Eyes of a Blue Dog
Love in the Time of Cholera
Memories of My Melancholy Whores
News of a Kidnapping
Of Love and Other Demons
One Hundred Years of Solitude
The Autumn of the Patriarch
The Handsomest Drowned Man in the World
The Woman Who Came at Six O'Clock
A Very Old Man With Enormous Wings
The Story of a Shipwrecked Sailor: Who Drifted on a Life Raft for Ten Days Without Food or Water, Was Proclaimed a Nati...
Strange Pilgrims

No One Writes to the Colonel and Other Stories Summary & Study Guide includes comprehensive information and analysis to help you understand the book. This study guide contains the following sections:

This detailed literature summary also contains Quotes and a Free Quiz on No One Writes to the Colonel and Other Stories by Gabriel García Márquez.

The first piece of writing in this collection is the novella (long short story) “No One Writes to the Colonel.” The title character, whose name is never given (neither is that of his wife) is a retired officer in the rebel army who, like many of his fellow officers in the past, has been waiting for years for a pension, promised in return for his giving up his revolutionary fight. The general fills his days, and his life in general with hope. His first hope is that long-promised / long-delayed pension payments will arrive: every Friday, much to the cynical amusement of the postmaster, the colonel checks on the mail, and in spite of being disappointed every time, he (the colonel) continues his routine. The colonel’s second hope is that the cockfighting rooster, left behind by his dead son, will win its next tournament and provide the colonel and his wife with some desperately needed income. Meanwhile, the colonel’s long-suffering wife struggles with illness, frustration with what she sees as her husband’s obstinacy (particularly about the rooster), and her own increasingly desperate efforts to give them both some kind of life in the face of looming poverty and oppression. Eventually, circumstances conspire to lead the colonel to choose the rooster’s well-being over that of his wife, with the result that when she asks what they will eat while the rooster is eating real food, he tells her that they will eat “shit.”

This story is followed by several other stories of varying lengths. Shorter stories include “Tuesday Siesta” (in which a woman and her daughter interrupt a priest’s siesta by asking to see the grave of the woman’s criminal son) and “Artificial Roses” (in which a woman who makes artificial flowers is challenged to face reality by both her blind grandmother and the departure of an important man in her life). Two other stories fall into this length-defined category: “One of These Days” (in which a quiet dentist has an opportunity to take painful revenge on the man whom he believes was / is responsible for the deaths of several men in the town) and “Balthazar’s Marvelous Afternoon” (in which a craftsman convinces himself that a failed sale is, in fact, a compliment).

Somewhat longer stories in the collection include “There Are No Thieves in This Town” (the story of a young, would-be criminal whose theft of a trio of billiard balls lands several people in trouble); “One Day After Saturday” (in which the lives of three frustrated people, including an elderly priest, are thrown into confusion and uncertainty by, among other things, the unexplained appearance of a large number of dead birds); and “Montiel’s Widow” (which tells the story of how a once-wealthy woman realizes how little is left of and in her life following the death of her manipulative, corrupt husband).

The final story in the collection gives its title to the second half of the book. “Big Mama’s Funeral” is the darkly comic, somewhat satirical story of the death and funeral of a powerful figure in organized crime. The story describes, in some detail, how Big Mama controlled the final days of her life; how she came to be such a powerful figure in the first place; how the various levels of government in her region responded to her death; and how, in the aftermath of her extravagant funeral, life continued as if she had never been alive at all.

No One Writes to the Colonel and Other Stories from BookRags. (c)2022 BookRags, Inc. All rights reserved.