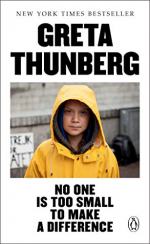 Summary
+Chapters Summary and Analysis
Our Lives Are in Your Hands - Prove Me Wrong
Our House Is on Fire - You're Acting Like Spoiled, Irresponsible Children
A Strange World - Together We Are Making a Difference
Can You Hear Me? - The Easiest Solution Is Right in Front of You
You Can't Simply Make Up Your Own Facts - We Are the Change and Change Is Coming
Important People
Objects/Places
Themes
Styles
Quotes
Topics for Discussion
Order our No One Is Too Small to Make a Difference Study Guide

Thunberg, Greta
This Study Guide consists of approximately 36 pages of chapter summaries, quotes, character analysis, themes, and more - everything you need to sharpen your knowledge of No One Is Too Small to Make a Difference.

No One Is Too Small to Make a Difference Summary & Study Guide includes comprehensive information and analysis to help you understand the book. This study guide contains the following sections:

This detailed literature summary also contains Topics for Discussion on No One Is Too Small to Make a Difference by Thunberg, Greta.

The following version of this book was used to create the guide: Thunberg, Greta. No One Is Too Small to Make a Difference. Penguin Random House LLC, 2019.

No One Is Too Small to Make a Difference is a collection of 16-year-old climate activist Greta Thunberg's speeches on the climate crisis, given between September 2018 and September 2019.

Throughout her year of activism, Thunberg has stirred a global grassroots movement, demanding political and economic change. Thunberg's self-written speeches trace her early and evolving awareness of environmental issues and global needs for reform. Throughout her addresses, the reader learns about Thunberg's past and her reasons for investment in the planet's condition. Thunberg gave the speeches in locations in Sweden, the UK, the United States, France, Canada, and elsewhere.

When Thunberg first learned about the climate crisis and global warming, she was shocked, unable to understand why, if the planet was in such a state no one was talking about it. She believed that if the climate were in such bad condition, if human, animal, plant, and oceanic life were in such danger, politicians and leaders would be able to talk about nothing else. However, she found just the opposite. Because so many voices perceived and cast the crisis as a political issue, they successfully dismissed the overwhelming amount of scientific data that proved how weak the climate is. Thunberg frequently calls upon united scientific facts she discovered through the most recent IPCC report and the Paris Agreement. These, as well as other scientific articles, taught Thunberg that the world has until 2030 to reduce carbon dioxide emissions by 50 percent before it is too late to make any productive change.

So disturbed and moved by the data she uncovered, Thunberg wrote an article about the environment that won a writing competition. After the article's publication she was contacted by an activist associated with Fossil Free Dalsland, Bo Thorén. Conversations with Thorén and the youth activists with which he worked at the time, inspired Thunberg to take action. In the spring of 2018, she independently organized and staged a school strike outside the Swedish Parliament building. While there, she passed out fliers and answered questions regarding the climate crisis. One of the individuals who approached her was another activist Ingmar Rentzhog, a Swedish entrepreneur. Interested in Thunberg's strike, he posted about her work on Facebook, winning her international attention and support.

After this first strike, Thunberg devoted herself entirely to the movement, striking for months in order to organize and lead rallies and protests worldwide. She has appeared before the United States Congress, the United Nations Climate Summit, members of the EU, the European Parliament in Strasbourg, the Houses of Parliament in London, and at a wealth of other significant international assemblies. During each of her addresses, Thunberg proves herself fearless and indomitable, demanding global powers wake up and save the planet in order to give their children and grandchildren the chance of a future. Thunberg's speeches have earned her a diverse and impressive audience, mobilizing international voices and identities. Thunberg claims herself and her supporters as change itself, assuring politicians that they will not stop until action is taken.

More summaries and resources for teaching or studying No One Is Too Small to Make a Difference.

No One Is Too Small to Make a Difference from BookRags. (c)2022 BookRags, Inc. All rights reserved.