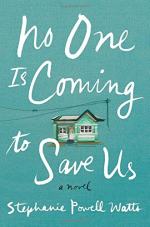 No One Is Coming to Save Us Summary & Study Guide

Stephanie Powell Watts
This Study Guide consists of approximately 37 pages of chapter summaries, quotes, character analysis, themes, and more - everything you need to sharpen your knowledge of No One Is Coming to Save Us.

No One Is Coming to Save Us Summary & Study Guide Description

No One Is Coming to Save Us Summary & Study Guide includes comprehensive information and analysis to help you understand the book. This study guide contains the following sections:

This detailed literature summary also contains Quotes and a Free Quiz on No One Is Coming to Save Us by Stephanie Powell Watts.

The following version of this book was used to create this study guide: Watts, Stephanie Powell. No One is Coming to Save Us. HarperCollins. 2017.

No One is Coming to Save Us is a character-driven novel of family and dreams by Stephanie Powell Watts. The story revolves around the African-American Ross family and their associates. At the head of the family is matriarch Sylvia, who feels as if she has failed her children. Sylvia struggles to hold together the family. Sylvia and her family live in the North Carolina town of Pinewood. The town is primarily black and segregated by class. Sylvia watches as most young people struggle to leave town, only to come back. Sylvia’s thirty-eight year-old daughter, Ava, works as a manager at the bank in town. Although Ava is successful and could easily leave, she is living with her husband, Henry, in the town where she grew up. Ava’s boyfriend from youth, JJ, now going by “Jay,” returns to town. He is now a self-made man with plenty of money to build a home on Brushy Mountain Road. He hopes to win Ava’s love once again.

JJ’s appearance stirs up old feelings, memories, trials, and difficulties. JJ himself came to town to live with relatives following his mother’s suicide, caused by his father’s cruelties and abuse. Sylvia is reminded by JJ of her son, Devon, killed by a car while walking home many years before. Sylvia’s husband, Don, has left Sylvia for a much younger woman. Nevertheless, love still exists between Sylvia and Don.

Ava’s husband, Henry, has been having a years-long affair with Carrie, a white woman by whom Don has a son. Ava is devastated about this because she herself has been trying for years to conceive, only to repeatedly suffer miscarriages. Sylvia and Ava are both happy to see JJ, but Sylvia worries that JJ will only make things worse for Ava. She is right. JJ’s attempts to romance Ava lead to a sexual affair which causes Ava to have something of a nervous breakdown. The breakdown leads Ava to consider drowning herself in the reservoir.

At the same time, Sylvia attempts to help and mentor a young black man in prison, Marcus, who is desperately seeking to turn his life around and make things better for his girlfriend and their son. Sylvia has an overwhelming desire to help make things right for young men and to keep them on the straight and narrow wherever she can given her own inability to do so for Devon. Sylvia is far more frustrated by her attempts to keep JJ and Ava from doing something they will both regret. She tells JJ that he and Ava will never work out because she is married and has too many thins going on in her life. But, JJ will not listen to Sylvia. Ava’s depression over her latest miscarriage and the confirmation of Henry's child by another woman send Ava into JJ’s arms.

Ultimately, Henry’s affair ends, and while Ava and Henry end up on friendly terms, Ava knows she does not want to get back together with Henry in a romantic relationship. Ava realizes that she can never love JJ the way he loves her. JJ sells his new mansion and takes off traveling. Ava ends up adopting two children, a brother and a sister.

JJ’s father comes looking for JJ. He is amazed that JJ has made something of himself. He leaves his number behind for JJ. JJ dreams of marrying Ava, having children with her, and their children having children. JJ seeks out God’s help in helping him find what he wants.

More summaries and resources for teaching or studying No One Is Coming to Save Us.

No One Is Coming to Save Us from BookRags. (c)2022 BookRags, Inc. All rights reserved.