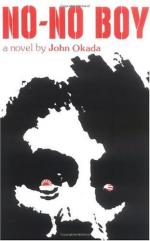 John Okada
This Study Guide consists of approximately 30 pages of chapter summaries, quotes, character analysis, themes, and more - everything you need to sharpen your knowledge of No-No Boy.

No-No Boy tells the story of Ichiro Yamada, a 25-year-old man whose parents came to the United States from Japan before his birth. Like many Japanese-Americans, Ichiro and his family were sent to a “relocation camp” far away from their home early in World War II. Although they had done nothing wrong, they were treated like criminals. After two years, Ichiro was offered the opportunity to join the American military. Some young Japanese-American men fought in the war, often to try to prove they were true Americans. Ichiro’s mother was an old-fashioned woman who felt 100% Japanese and tried to raise her sons to feel that way as well. Ichiro refused to join the army, and was sent to prison for two years. The book begins on the day he comes home to Seattle at the end of the war.

Ichiro is angry at the world. His mother is cold and stubborn, and she refuses to believe Japan lost the war. His father is weak and turns to alcohol to deal with his troubles. Ichiro’s brother wants to join the army to prove he is a real American, unlike his brother. Ichiro faces hatred, threats, and discrimination not only from white and black people but also from Japanese-Americans who view him as a traitor. He is confused and ashamed, feeling he has made a mistake that will destroy his life. He doesn’t know what he wants to do, but knows he can’t go back to his old life, pretending nothing has happened.

In this book, Ichiro’s friends represent the different choices young Japanese-American men could have made during this time in history. His friend Freddie went to prison as well, and since his release he just wants to have fun and not think about things. Ichiro’s friend Kenji, a veteran who lost his leg in the war, tries to help Ichiro despite his own very serious problems. Eventually, Kenji dies from complications due to his injury.

Kenji introduces Ichiro to Emi, a beautiful young woman who is married to a soldier who won’t come home. Ichiro develops feelings for her, but doesn’t think he will see her again after a couple of encounters. However, she seeks him out later in the book and tells him she is getting a divorce.

Much of the book centers around Ichiro’s troubled relationship with his parents. His mother can’t deal with reality and makes him feel he is wrong to want to be American in any way. She believes she will one day return to Japan, and sees America as a temporary place to live despite having been in America for many years. Ichiro’s father can’t deal with his wife and his drinking increases. Eventually, Ichiro’s mother commits suicide. Both Ichiro and his father have mixed feelings about her death.

Ichiro’s initial rage and despair begin to soften a bit as he meets some genuinely decent people, both Japanese-American and white, and as he learns to forgive both his mother and himself. Throughout the book, he is on a journey of self-discovery. He is trying to figure out how to go forward and live a happy, meaningful life despite the hatred and discrimination he encounters. Even the dramatic death of his friend Freddie does not turn Ichiro away from his desire to live in a peaceful world. The book ends on a hopeful note, with Ichiro’s basic kindness and good nature beginning to come to the surface once again.

More summaries and resources for teaching or studying No-No Boy.