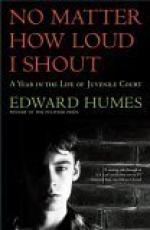 No Matter How Loud I Shout: A Year in the Life of Juvenile Court Setting & Symbolism

The main city and setting of the book.

A small city and suburb of Los Angeles in LA County where a juvenile court is located.

The location of juvenile cases in LA County and where much of the book takes place.

The room where Judge Dorn presided and where he implemented his controversial policies.

The most severe form of punishment for juveniles without going to adult court. A number of the seven kids Humes followed ended up there.

The areas of LA county where a number of serious crimes are committed.

The juvenile equivalent of adult prison.

The practice of engaging in dangerous gang activity.

Many of the kids are involved in murders. Some involved in the juvenile justice sentence wants all murder cases tried in...

No Matter How Loud I Shout: A Year in the Life of Juvenile Court from BookRags. (c)2022 BookRags, Inc. All rights reserved.