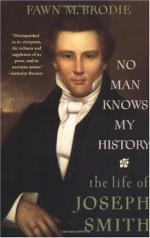 No Man Knows My History: The Life of Joseph Smith Summary & Study Guide

No Man Knows My History: The Life of Joseph Smith Summary & Study Guide includes comprehensive information and analysis to help you understand the book. This study guide contains the following sections:

This detailed literature summary also contains Topics for Discussion and a Free Quiz on No Man Knows My History: The Life of Joseph Smith by Fawn M. Brodie.

No Man Knows My Name: The Life of Joseph Smith by Fawn M. Brodie is a history of Joseph Smith, Prophet, Seer, Revelator and first President of the Church of Jesus Christ of Latter-day Saints from the point of view of an unbeliever, whose whole focus is to prove him to be a charlatan, a fake and a fraud. Ms. Brodie takes as her thesis a statement made by Joseph Smith at a funeral: "You don't know me. You never knew my heart. No man knows my history. I cannot tell it; I shall never undertake it I don't blame anyone for not believing my history. If I had not experienced what I have, I could not have believed it myself" (p. vii). From this statement, Ms. Brodie chooses to believe that his written history, the things which he shared with the world are false, and that his story is a myth and a legend.

It was when Joseph was between ages thirteen and fifteen that his life changed forever. Joseph determined to ask God which of all the churches was right. That request changed his life in a way he could not expect, along with the lives of hundreds of thousands of people, even millions, during the ensuing 175 years.

Joseph saw God, the Father, and His Son, Jesus Christ. They told him no church was correct, and that he should join none. From that day until his death, Joseph was constantly and consistently persecuted. Unfavorable stories were circulated about him, his family continued to struggle against false accusations, and lost their land and home.

Later, Joseph saw an angel who tasked Joseph with the responsibility of retrieving a portion of records, which contained a history of a people who had come to the Americas before the time of Christ, translate them, and share them with the world. From the time that locals discovered that Joseph had been allowed to take the plates from the ground, he was forced to create ingenious locations and unusual spots to hide this precious record.

It took some time for Joseph to learn how to comprehend and decipher the meanings of the symbols on the plates. As Joseph was then illiterate, he required scribes to write his translation. Oliver Cowdery was his third scribe. Within six months after Oliver joined him, the whole of the book was translated and ready for publication as The Book of Mormon. Joseph claimed that The Book of Mormon is the most accurate book written, and that one can get nearer to God through the reading of this book than any other written.

On April 6, 1830 Joseph organized the Lord's church with six members. Joseph preached the gospel as he had learned it in the Book of Mormon, soon gathering a large following. Their baptisms were often disrupted by armed mobs. Regardless, the baptisms continued, and the church grew. Men were sent out among the people around the country to preach the gospel.

In Kirtland, Joseph began to find that the greatest enemies of the church were those who had left the church as apostates. In each of the cities they developed, apostates joined mobs and led them in persecution of the Saints.

Political power, along with a sense of clannishness and pride among the Mormons, led to a hatred and consistent persecution of the members of the church. Three times they were forced from their homes with nothing but the clothing on the backs in the middle of the winter. They lost homes, food, and everything of value to the mobs each time.

Joseph was charged with tyranny and breaking the peace many times. The last time, he knew that his life would be forfeit if he turned himself in. However, he gave himself up to Governor Ford, governor of Illinois, who had promised him safety. Before evening, the mob, dressed as Indians, stormed the cell in which Joseph was held with his brother and friends. There, Joseph and his brother, Hyrum, were murdered, martyrs to the cause of the church and the Lord.

Many thought that the death of the Prophet, Joseph Smith, would bring an end to the church he founded. After some trials in which some of the leaders left the church and started their own churches, Brigham Young was voted President, Prophet, Seer and Revelator for the Church of Jesus Christ of Latter-day Saints. The Mormons moved to the mountains of the Great Salt Lake, where they were able to finally establish their church in peace. It is now over a million strong, with over 125 active temples.

Ms. Brodie, and many like her, tried to defame the honor of Joseph Smith, claiming that he was a fraud, a charlatan, and a trickster. No matter the lies, the calumny or defamation, Joseph Smith is held in honor by millions of members of the church he restored to the earth, the Church of Jesus Christ of Latter-day Saints. His memory is held with respect as the first modern prophet of these days.

No Man Knows My History: The Life of Joseph Smith from BookRags. (c)2022 BookRags, Inc. All rights reserved.