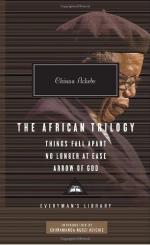 Chinua Achebe
This Study Guide consists of approximately 60 pages of chapter summaries, quotes, character analysis, themes, and more - everything you need to sharpen your knowledge of No Longer at Ease.

No Longer at Ease Summary & Study Guide includes comprehensive information and analysis to help you understand the book. This study guide contains the following sections:

This detailed literature summary also contains Topics for Discussion and a Free Quiz on No Longer at Ease by Chinua Achebe.

No Longer at Ease by Chinua Achebe is the story of a young Ibo man educated on scholarship in England, whose fine civil service job with perks and a beautiful fiancé get him caught up in a system he loathes and swiftly causes him to lose all.

Twenty-six-year-old Obi Okonkwo is convicted of accepting bribes as a civil servant. His boss, who testifies against him, and another British colonial official wonder what it is in the African makeup causes such aberrations, while Obi's people in the Umuofia Progressive Union (UPU) see it being merely a case of an inexperienced young person not going about it in the established manner. How Obi comes to this end is examined.

Obi meets beautiful Clara Okeke at a dance in England where both are studying, but makes no impression on her. They meet again traveling home to Nigeria, and their first kiss is interrupted. Obi's first contact with the UPU upon arrival goes as poorly as his first dance with Clara: he dresses casually and fails to prepare a grand speech. He prefers to room with an old friend than to be put up in a shoddy Nigerian-run hotel. UPU officers discuss how bribery works but doubt someone like Obi who knows "book" will need to resort to it. Obi's job interview turns into a literary discussion, and he visits his village while waiting for the verdict. The offering of kola nuts to honor his homecoming becomes an occasion for conflict between his fundamentalist Christian father and "heathen" villagers. Old Isaac is ready to "depart in peace", having seen his son returned. Mother Hannah is waiting for Obi's first child before she leaves. Why Clara wants Obi not to mention her is a growing concern.

Obi's boss, Mr. Green, is a European frustrated by living in times when he cannot treat Africans as he pleases. Obi receives special allowances that make him feel financially flushed. He insists on buying Clara an engagement ring after she reveals she is a member of an untouchable caste, the "osu". Obi is confident that love conquers all, setting up conflict with his parents. He is first confronted by the UPU, which he asks for a four-month grace period before beginning to repay his loan. When Clara is mentioned, Obi loses his temper and proudly rescinds the request. Obi gradually befriends an English secretary, Marie Tomlinson, with whom he shares an office. He is proud of overcoming his first temptation to take a bribe, but finds it hard to live on his wages. Obi and Clara conflict over a bank overdraft he takes, and she gives him £50 to cancel it.

Obi's friend Christopher emerges as an icon of male chauvinism and an adaptation to Nigeria's double cultural heritage. Christopher joins Obi's parents in objecting to Clara. He goes home to visit his dying mother, argues from scripture with his father about there being no longer "slave and free", but has no answer to his mother's threat to commit suicide if he marries Clara. Returning to Lagos, Obi's finances worsen as Clara needs money for an abortion. Obi begins taking the bribes, monetary and sexual, that he has resisted so valiantly—and in Christopher's view stupidly. The novel concludes with Clara's disappearance and Obi's mother's death. He goes through the grieving process rapidly, accepting realities, and achieving unexpected peace. Obi gets stung by the police on a small bribe, and the last paragraph refers back to the opening chapter: "an educated young man and so on and so forth".

More summaries and resources for teaching or studying No Longer at Ease.

No Longer at Ease from BookRags. (c)2022 BookRags, Inc. All rights reserved.