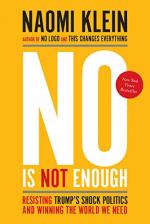 No Is Not Enough Setting & Symbolism

Throughout the investigation, Klein uses Trump’s estate Mar-a-Lago in Florida as a loaded term that encompasses the material-obsessed administration, calling it “a carnivalesque, members-only, all-for-profit ‘Winter White House’” (22). In the past year, since Trump has taken office, the club’s membership fees have doubled from $100,000 to $200,000 annually, a stark example of how Trump is using the presidency for profit. After dropping a massive missile strike on Syria, Trump infamously boasted about the chocolate cake at Mar-a-Lago, giving himself free advertising while also shedding light on Trump's blasé attitude toward human suffering.

To Klein, neoliberalism represents not only the worst aspects of conservative capitalism, but also a corroded, inherently unequal values system that benefits the few at the expense of the many. She describes neoliberalism without naming it within the first pages of her book, calling it a “still-powerful free-market ideological project – one embraced by centrist...

No Is Not Enough from BookRags. (c)2023 BookRags, Inc. All rights reserved.