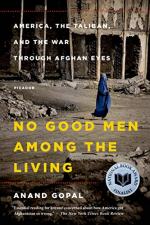 No Good Men Among the Living Summary & Study Guide

No Good Men Among the Living Summary & Study Guide Description

No Good Men Among the Living Summary & Study Guide includes comprehensive information and analysis to help you understand the book. This study guide contains the following sections:

This detailed literature summary also contains Topics for Discussion on No Good Men Among the Living by Anand Gopal .

No Good Men Among the Living by Anand Gopal describes the American war in Afghanistan from the perspective of three ordinary Afghans. The first is Akbar Gul, also referred to briefly as Mullah Cable, a former Taliban commander who rejoined the group during their resurgence several years after the U.S. invasion. Akbar Gul originally joined a local militia to protect himself and his family, but he became one of the most feared enforcers of Taliban law. It is clear, however, that Akbar Gul was not particularly interested in the Taliban’s religious ideology. Instead, he was primarily driven by the material wealth and personal fulfillment the Taliban provides.

The second major individual is Jan Muhammad Khan (JMK), an anti-Taliban warlord and close friend of Afghan President Hamid Karzai. At the beginning of the book, JMK was set to be executed in a Taliban prison but was saved at the last moment by the Taliban’s surrender to Karzai and the new Afghan government. Installed as the governor of Uruzgan province, JMK gained tremendous wealth and influence, but developed a reputation for corruption and self-serving violence. While he was nominally a U.S. ally, it is clear that this corruption sullied the United States in Afghans’ eyes and encouraged them to support the resurgent Taliban.

Finally, Gopal follows Heela, an Afghan woman forced to move with her family from Kabul to rural Khas Uruzgan during the Afghan civil war. Heela has strong aspirations to become a nurse or teacher, but is severely limited by strict customs barring women from leaving their homes alone or without a burqa. In many ways, Heela’s struggle to lead an independent life is symbolic of attempts by all Afghan women to play a greater role in post-Taliban Afghanistan. Heela is ultimately elected as a Senator from Uruzgan province.

In addition to these three individuals, Gopal describes the American obsession with defeating “terrorists,” often leading U.S. troops to attack, imprison, and kill prospective allies. More broadly, Gopal argues that this and other failures of the American war in Afghanistan were a result of U.S. officials misunderstanding and oversimplifying Afghan society.

No Good Men Among the Living from BookRags. (c)2022 BookRags, Inc. All rights reserved.