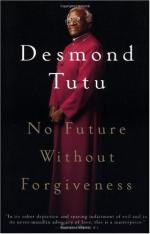 No Future Without Forgiveness Summary & Study Guide includes comprehensive information and analysis to help you understand the book. This study guide contains the following sections:

This detailed literature summary also contains Topics for Discussion and a Free Quiz on No Future Without Forgiveness by Desmond Tutu.

It is widely known that South Africa suffered under a brutal regime of forced segregation and fierce violence imposed on resisters from the early sixties until the early nineties. Political activist and long-time prisoner Nelson Mandela is released at this time and leads his party, the African National Congress, to victory in South Africa's first truly democratic election on April 27th, 1994. It is also widely known that Archbishop Desmond Tutu, a fellow Nobel Peace Prize winner and leader of the Anglican Church in South Africa, has something to do with the process.

No Future without Forgiveness explains Tutu's crucial role in leading South Africa's Truth and Reconciliation Commission or TRC. Mandela creates TRC to publicize the profound human rights abuses under the apartheid regime. It not only describes Archbishop Tutu but also his concrete struggles, failures, and accomplishments as leader of the TRC.

As an Archbishop, Tutu views the struggle against apartheid in largely theological and spiritual terms, especially in Christian terms. Tutu stridently endorses the Christian view that God values all human life absolutely and that forgiveness is a necessary corrective for social peace and harmony. He backs his optimism with a conviction that Christ's death on the Cross showed that He would ultimately bring justice to the world, regardless of what evil the individuals may have done in the world as it is today. Most striking is Tutu's argument that Christianity requires that in many circumstances retributive justice or punishing wrongdoers for violating the law should be replaced with restorative justice. Restorative justice involves court action to reintegrate the perpetrator into society by reconciling him through confession to his community.

No Future without Forgiveness contains eleven chapters. In Chapter One, The Prelude, Tutu explains how the TRC is established and the "spiritual" experience of the 1994 vote. In Chapter Two, Nuremburg or National Amnesia? A Third Way, Tutu argues that the only way for the Mandela regime to avoid incredible bloodshed, retribution, and civil strife is to find a path between asking victims to forget the past and let perpetrators off the hook. Either choice will result in disaster. The point of the TRC is to hold perpetrators responsible as well as avoid the appearance of acting out of vengeance.

In Chapter Three, The Fullness of Time, explains some of the political background concerning the release of Mandela and how he comes to power, along with Tutu's belief that complete justice will come in the world through God's grace. Tutu responds to those who think that the TRC lets people off the hook by not seeking justice in Chapter Four titled What About Justice? In Chapter Five titled Up and Running, the author discusses the formation and first days of operation for the TRC. He also explains its Christian spiritual orientation.

Chapter Six reviews several victim hearings while Chapter Seven recounts the trial of Winnie Mandela's bodyguards, which is perhaps the most dramatic moment for the TRC. Chapter Eight explains how the TRC affects victims, and Chapter Nine explains many of the stresses involved with running the TRC. Chapter Ten discusses the attitudes of perpetrators to the TRC while Chapter Eleven reinforces Tutu's main line of argument that the philosophy behind the TRC is the only way forward for South Africa.