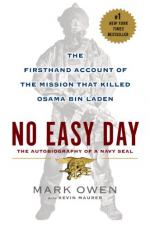 This detailed literature summary also contains Topics for Discussion on No Easy Day by Mark Owen.

“No Easy Day” by Mark Owen and Kevin Maurer is the story of Mark Owen’s career as a member of the Navy’s elite unit known as SEAL Team Six. Owen tells of the challenges he faced as a candidate for SEAL Team Six. He met the basic requirements for this candidacy. He had been a Navy SEAL for several years and had been deployed on two missions. SEAL Team Six had been established in the early 1980s to handle difficult missions including hostage rescue and infiltrating into enemy territory. It had been Owen’s dream for many years to become part of the legendary and mysterious Team Six.

After passing the rigid requirements and rugged training in his nine months in the Green Team he was notified that he was accepted in to the elite Team Six. His first deployment was to Afghanistan in 2005 after the American invasion of Afghanistan and Iraq. The United States had vowed to kill or capture the terrorists who had been responsible for the devastating terrorist attacks on New York, Washington, D.C. and Shanksville, PA on September 11, 2001. Their number one target was the terrorist leader of al Qaeda, Osama bin Laden.

Owen spent his time in the Middle East in deployment both in Afghanistan and Iraq. He had been part of the team that was sent into Tora Bora after bin Laden had been spotted there. But it was a wild goose chase. The team could never find a trace of the terrorist leader. Owen had missions that included the pursuit of insurgents, Taliban leaders, arms dealers and terrorist recruiters. His was a sharpshooter and often played the role of point man – the top shooter of a squad. He was also on the team who rescued Captain Phillips who had been kidnapped by pirates on the high seas. The Team was able to rescue Phillips unharmed, kill three of the pirates and apprehend the fourth. It was then that Washington took note of the outstanding valor and skill of the men of SEAL Team Six.

In 2011, there was speculation about a secretive mission that was in the offing. Owen was on leave but received a message from his boss to attend a meeting. It was at the meeting he learned that he had been selected for a special mission. The exact nature of the mission wasn’t initially divulged. Those selected for the mission were only told that they’d be training in North Carolina in preparation for the mission. Eventually, Owen and the others learned that they were going after Osama bin Laden. The CIA had found him living in a suburb in Pakistan. Their mission was to capture or kill the most wanted man in the world.

The mission was a daunting as well as historic one. The Team members were given as much intel as the CIA had but they knew nothing about the layout of the large house where bin Laden allegedly was living with a number of other people. Owen and the others trained, planned, prepared and practiced for weeks. They were ready to go but had to wait until the President gave the final word. After many anxious days, they got the got the green light and were on their way to Pakistan to avenge America and to make history.