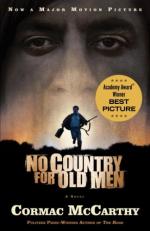 Cormac McCarthy
This Study Guide consists of approximately 44 pages of chapter summaries, quotes, character analysis, themes, and more - everything you need to sharpen your knowledge of No Country for Old Men.

No Country for Old Men Summary & Study Guide includes comprehensive information and analysis to help you understand the book. This study guide contains the following sections:

This detailed literature summary also contains Topics for Discussion on No Country for Old Men by Cormac McCarthy.

No Country For Old Men by Cormac McCarthy is a look at the changing times a sheriff faces towards the end of his career in law enforcement. Sheriff Ed Tom Bell investigates a massacre in the desert with obvious ties to heroin and Mexico. It is a sign of changing times that Bell is sorry to see and has a difficult time relating to. It punches a large hole in what he had always seen as his responsibility - to keep his town and the people in it safe.

Llewelyn Moss is the first one on the scene, out hunting and stumbling across the carnage. One man is still alive and asks Moss for water, but Moss has none. He looks around at the bodies and the firepower they carried, notes the drugs in the back of the third vehicle, and comes to some simple conclusions. He is sorry he ever approached these vehicles and thinks that there must have been someone else. He wipes every surface down that he might have touched and tracks the last man to his final resting place not much farther away. A document case sits near by, and Moss opens it to find it full of money. His next decision changes everything. He makes his first mistake when he picks up the case, and goes home. His wife Carla Jean is waiting for him, and she knows that the money is nothing but trouble. She doesn't want anything to do with it. Moss makes his second mistake when he gets out of bed later, his conscience bothering him, and goes back to the desert to bring the survivor the water he asked for. Approaching the vehicle, he sees the door is now open and the man has a new gunshot wound right between his eyes. The drugs are gone, and Llewelyn knows he just made the dumbest mistake of his life.

The men who own the drugs and the money are not going to simply let him go, he discovers as he returns to his truck and sees the man looking at it. He knows right then he will never see his truck again, and sets out in the opposite direction. He manages to elude them that night, but the clock is now running. Llewelyn is only too aware that by Monday morning, they will be able to trace his truck to learn his identity. The chase has already begun. In the days that follow, Moss will send his wife to her mothers in Odessa, hoping to keep her safe while he just concentrates on staying alive. With over two million in a case, he tries to disappear, but is tracked by way of a transponder in the case, and comes face to face with one of several people who want it back. The initial investor has sent a lunatic named Chigurh who enjoys the job of killing way too much; the Mexicans send a group to recoup their investment; and the law is simply trying to do their job, but it all adds up to a run for his life that leaves a trail of bodies in his wake. Eventually, almost everyone connected to the case will die with the exception of Chigurh who offers his services to the man who financed the deal, and Sheriff Bell who manages to stay out of harms way, and retire with his wife Loretta.

In a story that is full of violence, this novel is a glimpse at the nature of change and how each generation looks at those coming and can hardly recognize their place in it anymore. It is a story of love, fear, greed, and determination to do the right thing.

No Country for Old Men from BookRags. (c)2022 BookRags, Inc. All rights reserved.