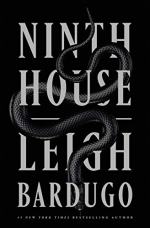 Leigh Bardugo
This Study Guide consists of approximately 101 pages of chapter summaries, quotes, character analysis, themes, and more - everything you need to sharpen your knowledge of Ninth House.

The following version of this book was used to create this guide: Bardugo, Leigh. Ninth House. Flatiron Books, 2019.

Bardugo’s novel is divided into a prologue and 32 chapters, which primarily occur in winter, but often flashback to the previous fall and summer. The novel is set at Yale University in New Haven, Connecticut, where the main character Galaxy “Alex” Stern, a 20-year-old girl, currently attends school. The novel is told from a third-person limited point of view, with Alex as the primary narrator. However, when the novel flashes back to the prior fall, fellow university student Daniel “Darlington” Arlington takes hold of the narration.

Alex begins the novel by hurrying to a magic ritual. Alex is the only student at Yale who can see ghosts without the aid of magic, and as a member of Lethe House, her job is to make sure nothing goes wrong during the rituals that Yale’s eight secret societies perform. Alex works for Dean Sandow, who is head of Lethe House, and the man that offered her a position at Yale. Typically her mentor Darlington assists her, but he has recently gone missing.

After the ritual, Alex receives a phone call from graduate student Pamela Dawes, who also works for Lethe House. Dawes tells Alex that the dead body of a girl named Tara Hutchins has been found at the campus gym. Alex heads to the gym. Detective Turner, a man who works for both Lethe House and the police department, assures her that the societies are not involved in the murder, as the girl was not a student. Alex sneaks into the coroner van to see Tara’s body covered in stab wounds, and the coroner tells her Tara’s boyfriend is the prime suspect.

The next morning Alex is called into Professor Belbalm’s office. She offers Alex a summer internship, and Alex eagerly accepts.

Alex has a flashback to her childhood. When Alex was on a school trip in middle school, the ghost of a man was somehow able to rape her in a public restroom. After the event, Alex entered into a downward spiral, as she turned to drugs as an escape from ghosts. She eventually dropped out of school and moved in with her boyfriend and drug dealer, Len.

Back to the present, Alex asks Dawes to go to the morgue with her. Alex sneaks into see Tara’s body once again, and performs a ritual that allows her to see the night Tara died. Alex sees Lance stab Tara, but something about the memory seems wrong.

The next morning, Alex is attacked by a gluma, which is a spirit raised from the dead. Alex narrowly survives, and is convinced the societies sent the gluma after her and are involved in Tara’s murder.

Alex returns to her dorm to find out that her roommate Mercy has been sexually assaulted by a fraternity student named Blake Keely. Alex sees the video and realizes that Blake used Merity, a compulsion magic drug used by the societies. Alex goes to the fraternity house and uses compulsion magic to make Blake delete the video, and then humiliates him by recording a video of him eating feces.

Alex performs a ritual that allows her to cross over into the Veil and talks to one of the campus ghosts, Bertram North. North cannot find Tara’s ghost in the Veil, so he asks Alex to bring him a personal item of Tara’s. Alex sneaks into Tara’s apartment, only to be attacked by Tara’s boyfriend Lance. Alex somehow forces North to possess her, and fights back. Suddenly, Turner arrives and Lance uses portal magic to teleport back to his jail cell.

A flashback reveals what happened the day Darlington went missing. While he and Alex were performing a ritual, he managed to figure out that Alex murdered her former roommates prior to coming to Yale. Alex admitted her guilt, but Darlington was suddenly swallowed up by a portal hole before he could do anything.

Another flashback shows the day that Alex murdered her roommates. Alex’s best friend Hellie was murdered by Len’s friend Ariel. Somehow, Alex was able to let Hellie possess her, which gave Alex enough strength to single-handedly murder Ariel and her abusive boyfriend Len.

Back to the present, Alex and Turner head to the prison to question Lance. He says he didn’t murder Tara, and that Tara had been selling drugs to Kate and Colin, two society members. Tara had been growing Merity and mushrooms for portal magic, and had learned about the secret societies.

That night, Alex and Dawes perform a ritual with Sandow and a woman named Michelle to try to bring Darlington back. Instead, they summon a demon using Darlington’s voice. Dawes says that Darlington had fallen into the mouth of a hellbeast rather than a portal, meaning the demon consumed his soul.

Dawes and Alex return to Il Bastone, one of Lethe’s campus buildings, when Blake breaks in. He confesses to murdering Tara and tries to kill Alex. Sandow arrives, and using compulsion magic, Blake orders Sandow to kill Alex. Alex manages to summon magical jackals to save herself. Blake crawls back over to Alex, but before he can do anything, Dawes crushes his head and kills him.

After the incident, Alex manages to find Darlington’s notes on Tara’s case, and realizes that women have been being murdered to create magical nexuses for the societies to use. Realizing that Sandow has been trying to get a new society a tomb, she is convinced he actually murdered Tara. Alex confronts Sandow and he confesses that he used magic to glamour himself as Lance, and murdered Tara. However, no nexus of magic was created. Sandow admits that he was also the one who got rid of Darlington and sent the gluma after Alex. Alex summons North into her body to attack Sandow, when suddenly Belbalm walks in.

Belbalm reveals she can also see ghosts, and that she and Alex are Wheelwalkers, meaning they can enter both the physical and spiritual realms. Belbalm exposes that she is actually North’s murdered wife, Daisy, and that she consumed the soul and took the body of her housekeeper. Belbalm has been consuming the souls of young girls every few years to stay alive. Sandow’s ritual did not work because Belbalm did not consume Tara’s soul. Belbalm confesses that her plan is to consume Alex’s soul, and after quickly killing Sandow, she attacks Alex. Alex fights back by summoning an army of ghosts, and is able to pull the spirits of Belbalm’s victims out of her body by calling out their names. As Alex calls out Belbalm’s real name, Daisy’s soul leaves Belbalm’s body and is devoured by the ghosts.

The novel ends with Sandow’s funeral. Alex reported what happened to Lethe House’s board, who covered up Sandow’s death as a heart attack. Belbalm was simply reported as missing. After the funeral, Alex tells Dawes that she thinks Darlington is alive but has turned into a demon, and asks her to help her bring him back.

More summaries and resources for teaching or studying Ninth House.