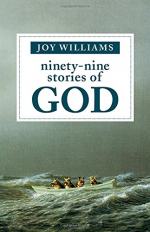 This detailed literature summary also contains Quotes and a Free Quiz on Ninety-Nine Stories of God by Joy Williams.

The following edition of this book was used to create this study guide: Williams, Joy. Ninety-Nine Stories of God. Tin House Books, 2016.

A note on formatting: This book is a collection of 99 short stories that range from one sentence long to, at most, three pages long. The publisher has decided to not include conventional page numbers on a page-by-page basis. Instead, each story has a prominent number at the beginning. Accordingly, when this study guide references a page number, i.e. (13), it is not referencing the 13th page of the book. It is referring to the 13th story, also titled “Moms.”

While there are not explicitly stated links that bind together the 99 short stories of this collection, there are about a dozen stories that feature the character of the Lord. These stories are not necessarily listed in chronological order, and it can be assumed that each story involving the Lord is related to the others because, in each story, a similar system of rules governs how the Lord thinks and acts. In many ways, the Lord is all-powerful and in charge of the universe. However, instead of wielding that power in conventional ways, the Lord appears to be an easygoing man who regularly finds himself in ironic or comic everyday scenarios, such as buying raffle tickets in an attempt to enter a demolition derby or struggling to come up with a satisfactory guest list for a party He is throwing. There are hints at the Lord’s tremendous powers because, in two stories late in the collection, He decides to live first with a colony of bats, and then with a pack of wolves. In these stories the narration references that the Lord has become tired of living with humanity. He also carries out an extended conversation with the pack of wolves, both of which indicate some type of super-human abilities.

The rest of the collection largely consists of stories from a handful of different categories:

-Stories that essentially function as essays, since they describe real-life events, both known and unknown. For instance, one story describes the DNA evidence involved in the infamous O.J. Simpson trial. Another story describes the lesser-known but still true incident in which a South Korean scientist was able to change the genetic structure of a dog, enabling it to grow red.

-Stories that are a sentence or two long, and essentially function as aphorisms or proverbs.

These categories do not encompass every single story in the collection, and there are others that combine two or more of these categories together. The stories are not ordered or otherwise categorized by their different types. Instead, they are blended among each other, usually such that the themes of a sequence of stories build off of one another.