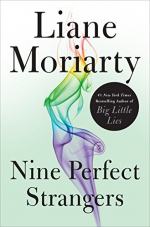 Liane Moriarty
This Study Guide consists of approximately 80 pages of chapter summaries, quotes, character analysis, themes, and more - everything you need to sharpen your knowledge of Nine Perfect Strangers.

The narrative, which is mostly told in the third person perspective of each of the major characters, begins with Yao, a trainee paramedic, and his partner, Finn, answering an emergency call placed by the PA of a woman named Masha. When they arrive, Masha says that nothing is wrong with her and insists on continuing to do her work. Then, she has a seizure. Yao misinterprets the situation and thinks that they need to wait for the seizure to end. Finn, however, realizes that she is in cardiac arrest. They transport her to the hospital. She survives the heart attack, and her stay in the hospital causes her to make a radical career and lifestyle change. She becomes healthy and fit and opens a health and wellness resort called Tranquillum House. She recruits Yao and Delilah, the PA who saved her life by calling the paramedics, to work for her.

Ten years after Masha's life-changing heart attack, the point of view charges to the third-person perspective of Frances Welty, a romance writer suffering from physical pains manifested by career and romance issues. She is on her way to Tranquillum House due to the recommendation of a friend of hers. From the reviews, Frances discovers that guests either loved their stay there or hated it. On her way, she has a hot flash and stops on the side of the road, waiting for it to pass. A man who she calls the serial killer steps to help her. She convinces him that she is fine and continues her journey. She arrives at Tranquillum House, but cannot open the gate. Finally, a couple arrives in Lamborghini, and they all gain access into the resort.

Once inside, Frances meets Yao, who is her personal guide. He shows her around and points out that she will be spending a lot of time in the yoga and meditators room. She also gets a massage from a women named Jan who is dating a policeman named Gus. In addition to Frances, there are eight other guests who are there for the 10-day treatment. Ben and Jessica are there in the hopes of saving their marriage. Carmen wants to lose weight. Tony wants a new outlook on life, and Lars is trying to deal with a rupture in his relationship with his partner, Ray, who wants a child while he does not. Napoleon, his wife Heather, and their daughter Zoe, are looking to deal with the grief they feel due to the suicide of Zoe’s twin brother, Zach.

For Frances, and the rest of the guests whose own stories and views intersperse with hers, the Tranquillum House method takes getting used to, but they manage. She meets Masha and finds her impressive. Then one night, Yao and Delilah wake up the guests and take them to the yoga and meditation room. They do not think this is strange as they have had to get up in the middle the night before. However, this time, Heather notices something strange and forces Masha to confess that she has drugged everyone. The guests are not happy in general, but it is already too late. They go through guided therapy during which they

They fall asleep and when they wake up, they discover that they are locked in the room. Masha, Yao and Delilah watch them as they try to figure out how to unlock the door which seems to need a code. The length of time it takes them to find the clue which should give them the code annoys Masha. When they finally realize where the code is located, their method of obtaining it also annoys her. The code should be in a Russian doll, but even to Yao’s surprise, it is not there. Masha gives them another clue that the group misses at the time. Yao becomes upset when Masha tells him that there Is no code because the guests need to feel fear. When Masha, Yao, and Delilah hear the guests discussing notifying the police, Delilah says that she will make some tea, but leaves the premises in Ben's car instead. Masha sedates Yao who threatens to let the guests out of the room. Afterwards, Masha thinks of ways to make her guests feel fear. She makes them defend each other and then makes them believe that the resort is burning down. However the guests realize that there is not a fire and Frances realizes that the door may now be unlocked. The group tries it and it is. They go upstairs and confront Yao who is now awake and tries to appease them. They tell him that they need to report their actions to the police. Masha appears and attacks Heather and when she and Heather exchange words about motherhood. Frances stops her by hitting her on the head.

As a result of their actions, Marsha spends time in jail, but then becomes sought after due to her methods. Yao receives a suspended sentence, marries his ex-fiancee, and has a child. Frances and Tony get married and Frances writes a bestseller. Lars tells Ray that he will consider having a child. Ben and Jessica get a friendly divorce and realize that it is for the best, and Carmel accepts her body and embraces her life. Napoleon, Heather, and Zoe move on as a family and come to terms with Zach’s