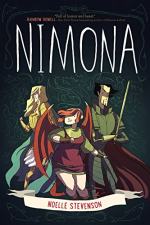 This detailed literature summary also contains Quotes and a Free Quiz on Nimona by Noelle Stevenson.

Note: Due to the structure of this novel (a graphic novel), paragraph numbers refer to panel numbers.

“Nimona” is a young adult graphic novel by Noelle Stevenson which follows the adventures of Nimona as she serves as sidekick to the villainous Lord Ballister Blackheart, determined to overthrow the Institute of Law Enforcement and Heroics, believing them to be corrupt. Ballister agrees to take on Nimona upon learning she is a shapeshifter. He can use all the help against Sir Ambrosious Goldenloin, Champion of the Institute, and hero in the public eye. Ballister harbors deep hatred for Goldenloin, for the two used to be friends at the Institute years before. Following a joust that he lost to Ballister, Goldenloin cruelly shot off Ballister’s arm. With no use for a one-armed hero, Ballister was thrown out and became a villain.

Ballister and Nimona come to get along very well. He is a man of science and morals, while she is a girl of magic and passions. Ballister, though a villain, operates on a moral code, killing only when absolutely necessary. The two have several encounters with Goldenloin as they raid research facilities and rob a bank, giving money to the poor. Ballister also develops a nonlethal poison to make people sick to blame the Institute. Secret files Nimona steals from the Institute reveal the Institute has begun a weapons program using jaderoot, a very rare and very poisonous outlawed plant. It is all the proof Ballister needs to demonstrate the Institution is corrupt. Nimona transforms herself into a news anchor and reveals this information to the public.

Goldenloin cannot get ahead of Ballister and Nimona, and must report his failures to the Director of the Institute. The Director calls for the assassination of Nimona and Ballister, but Goldenloin doesn’t want to become a cheap assassin. The Director threatens his job and promises Ballister will live if Goldenloin can capture him and kill Nimona. Goldenloin reluctantly agrees to this new plan, laying a trap for Ballister and Nimona at the Royal Joust. The trap fails, and Goldenloin is replaced. When two people die of illness, Ballister blames himself and heads to the hospital to give those still suffering the antidote. After this, he is captured without a fight by forces of the Institute. While he is in prison Ballister receives an apology from Goldenloin for the past. When Nimona attempts to rescue Ballister, she is captured and imprisoned.

To escape, Nimona splits herself in half. Her anger becomes a dragon that wreaks havoc in the City, killing the King, the Director, and many more. With the help of the Anomalous Energy Enhancer, Goldenloin attempts to subdue the dragon by sucking away its energy. Goldenloin is severely wounded. Meanwhile. Ballister finds Nimona’s other half. She explains it is dangerous to split herself in half, because the weaker half always loses and disintegrates. Ballister seeks to force both halves to reconcile, but he is unable to calm the dragon. In the end, he must kill the dragon. He believes this means that Nimona has been killed, but Nimona survives. She visits Ballister only briefly before disappearing in a crowd. Ballister hopes he will see her again one day, and she will know him as a friend. Goldenloin and Ballister, meanwhile, become friends once again.