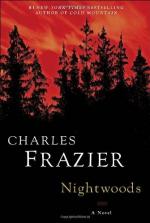 Charles Frazier
This Study Guide consists of approximately 33 pages of chapter summaries, quotes, character analysis, themes, and more - everything you need to sharpen your knowledge of Nightwoods.

This detailed literature summary also contains Topics for Discussion on Nightwoods: A Novel by Charles Frazier.

Luce is a beautiful young woman who lives as a caretaker of an abandoned lodge. She has limited contact with other people, including her father who is a deputy in the area. Luce has no contact with her only sibling, Lily, other than letters. Luce's father, Lit, raised Luce and Lily from the time their mother left when they were very young children. When Luce receives word that Lily has been murdered by her husband, Bud, Luce agrees to take in Lily's twins, Dolores and Frank. She soon discovers the children have been traumatized; probably by witnessing their stepfather kill their mother and by his subsequent treatment of them. Bud is charged with murder but with the skillful maneuvering of his lawyer, he is not convicted. His lawyer however warns that the state could file the charges again if new evidence surfaced. Bud immediately begins to seek the money Lily had hidden from him and to worry that the twins, though they are very young and don't talk, may start talking and put an end to his freedom. He winds up in the town near Luce's lodge and sets himself up as a vital part of the community, running illegal liquor.

Luce, meanwhile, tries to settle in with the twins. They are enamored with fire and set fire to anything they can in the initial days. They refuse to talk and either scream or withdraw whenever Luce touches them. There seems to be a breakthrough when Luce and the twins visit one of her only neighbors, a woman named Maddie who is the epitome of a backwoods resident. Maddie has a horse named Sally and the twins repeat the horse's name, then allow Maddie to put them on Sally's back where they happily ride whenever they have the chance.

The owner of the lodge, old Mr. Stubblefield, dies, leaving the lodge and other holdings to his grandson, Stubblefield, who had a crush on Luce when they were teenagers. Stubblefield spends as much time as possible near the lodge to be with Luce and takes on the challenge of reaching the twins. Stubblefield has begun to question Bud's identity. Bud is meanwhile providing liquor and drugs for Lit and he also begins to question Bud's identity. Bud murders Lit and threatens Stubblefield, then goes to the lodge where the twins see him and run away. There's a frantic search for the next two days and Lit's body is found. Luce is the one to find the twins but Bud has already located them. They have found the money among Lily's possessions and have used the bills to start fires. Luce has a razor with her and manages to get close enough to put a serious gash in Bud's wrist, bringing an end to his threats. He manages to get away from Luce but is too weak to try to run away or retaliate.

Luce goes to the twins but knows she still can't push them. They return to the lodge with her where Stubblefield and Maddie are waiting. By the time that there's a Christmas program at the church, Stubblefield and Luce are settled in as parents to the twins though they remain alert on the lookout for Bud, in case he has survived.

More summaries and resources for teaching or studying Nightwoods: A Novel.