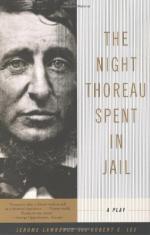 The act opens with Henry soliloquizing about freedom. He is speaking to the sleeping Bailey, describing the choice he has made between paying his taxes and asserting his independence. He adds that the government is afraid of the choice he has made, because it may encourage others to do the same.

The scene then shifts to Henry and Lydian. Lydian insists that Henry must learn to conform ("to get along, you have to go along!"). Henry reacts violently against this idea, chanting her words back to her in protest. Lydian then sends Edward berry picking with Henry, which Henry describes as Huckleberry hunting. Henry describes how he used to gather Huckleberries when he was a child, an activity that he says was better than just eating the pudding his mother made from them.

Henry and Edward gleefully gather and eat Huckleberries for a...