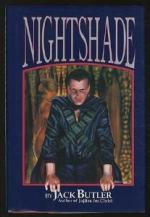 Jack Butler
This Study Guide consists of approximately 37 pages of chapter summaries, quotes, character analysis, themes, and more - everything you need to sharpen your knowledge of Nightshade.

Nightshade is a novel of teenage romance, rebellion, and dark fantasy by Andrea Cremer. Cal, a female Alpha Guardian, is able to take the form of a wolf to serve her masters, the Keepers, but her life is completely controlled by them and she grows to resent this fact. One night, as she and her beta, Bryn, are patrolling the mountain near a sacred site, Cal decides to save the life of a human boy by letting him drink her blood after he is attacked and almost killed by a Grizzly Bear.

The act could get her executed by the Keepers, but Cal does it because she feels that it is the right thing to do. The next day, the Keepers are waiting to speak with her about her intended union or marriage with the Bane alpha, another teenager of her same age by the name of Ren. They want to be sure that Cal is comfortable with the union and Cal doesn't know what to say because she has always been told that the union was simply the way that things would be. The next day at school, it turns out that Shay is a new student there, and she does not know how to keep what she has done a secret. He makes several attempts to approach her, but is constantly fended off by the other Guardians, particularly Ren, who talks to Cal about the union and invites her and her pack to a party so that they can make the transition go more easily. It turns out at the party that Shay is even more important than anyone had thought.

He is the nephew of Bosque, a powerful Keeper, and Cal and the rest of the Guardians are tasked with protecting him. Shay confronts Cal outside the party and invites her to coffee. She agrees, but they are attacked by two Searchers on their way there. Shay becomes very interested in the history of the Keepers and Guardians, and steals a book from his Uncle's private library in order for him and Cal to translate it. Cal finds herself more and more attracted to Shay, a fact that does not go unnoticed by Ren, who is increasingly jealous and protective of Cal. Cal does not take to Ren's new attitude well at all and begins to dread the union more and more, despite the fact that she knows Ren is not a bad person. The night of the union finally arrives, and Cal is horrified to discover that Shay is to be sacrificed during their union. Only concerned with Shay, she escapes with him and is nearly stopped in the Rowan Estate. However, she is captured and taken by the Searchers and completely uncertain of her fate by the end of the novel.

More summaries and resources for teaching or studying Nightshade.

Nightshade from Gale. ©2005-2006 Thomson Gale, a part of the Thomson Corporation. All rights reserved.