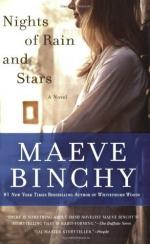 Maeve Binchy
This Study Guide consists of approximately 57 pages of chapter summaries, quotes, character analysis, themes, and more - everything you need to sharpen your knowledge of Nights of Rain and Stars.

Nights of Rain and Stars Summary & Study Guide includes comprehensive information and analysis to help you understand the book. This study guide contains the following sections:

This detailed literature summary also contains Topics for Discussion and a Free Quiz on Nights of Rain and Stars by Maeve Binchy.

The novel, published in 2004, takes place in modern times and tells the story of a shocking tragedy that impacts the lives of both the locals and a group of tourists. It is set principally in a small Greek fishing village called Aghia Anna, located on a small Greek island.

Andreas, the gentle old tavern owner, is the first to witness the tragedy, but is unwilling to accept it as reality. From his tavern high on the hill, he sees the fire down in the bay. He is convinced his eyes are playing tricks on him; it cannot truly be coming from the Olga, his friend Manos's tourist boat.

As he prepares his tavern for the day, he notices a group of tourists climbing the hill, turning in open-mouthed horror to stare at the bay. Their remarks confirm the awful truth: the Olga is indeed on fire. A few in the group comment that they were on the same boat only yesterday; it could have been them in the fire.

The tragedy quickly draws the little group closer, allowing them to learn more about each other than they would have otherwise. Andreas serves lunch and persuades them to call family or loved ones back home to assure them they are safe. The resulting dialogue begins to reveal the reasons that they are there. Each is escaping a bad situation at home. Elsa, a beautiful young German journalist, recently quit her position on a television current affairs show and has run from her boyfriend/ boss. David, an English Jew, loves his family but does not want to take over his father's business. Thomas, a professor and poet, can handle his divorce, but not the thought of sharing his son with another man. Fiona and Shane, a young Irish couple, are grappling with their relationship. Fiona loves him unconditionally and has run away with Shane to prove to everyone that they are wrong about him. He deals drugs, loves no one, and believes that he is right and the world is wrong.

As they return to their accommodations in town, their warm, caring attitudes concerning the boat tragedy cause the villagers to open up to them and become involved in their lives. One resident, Vonni, an Irishwoman who came to the island thirty years before to marry a local, becomes especially involved with these foreigners. They find that she has an uncanny knack for drawing out personal issues, seemingly thinking she has all the answers. However, she remains a mystery to the intrigued group, who endeavor to find out about her mysterious past. The villagers, however, are fiercely protective and secretive about her, and offer little help. If the tourists have any questions, they must ask her.

As the days go by, the small group becomes close friends in a short amount of time. The villagers remark that they assumed they had been friends for years. With Vonni's help, the tourists gradually begin to realize how they must solve their problems, developing new wisdom and maturity during their short stay in Aghia Anna. As they prepare to act on their newfound wisdom, they gratefully recognize Vonni's momentous role in their growth, though they may have resented her at times. However, Vonni begins to question her right to interfere in the lives of others when she has made such a mess of her own life.

As light rain falls on Andreas's tavern, and his recently returned son, Adonis, dances his native Greek dance, Vonni, Andreas, and the remaining group are hopeful that Vonni's son will also one day return.

More summaries and resources for teaching or studying Nights of Rain and Stars.

Nights of Rain and Stars from BookRags. (c)2022 BookRags, Inc. All rights reserved.