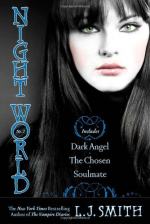 L. J. Smith
This Study Guide consists of approximately 38 pages of chapter summaries, quotes, character analysis, themes, and more - everything you need to sharpen your knowledge of Night World No. 2.

Night World 2: Dark Angel, The Chosen, and Soulmate are the second set of novels in the Night World Series by L.J. Smith. In these novels, three new characters find their soulmates as the night world quickly moves toward some unnamed revolution. In Dark Angel, Gillian survives a near death experience only to discover she is a witch and the guardian angel she brought back with her is really a soul with unfinished business. In The Chosen, vampire hunter, Rashel, finds herself inexplicably drawn to a vampire even as she vows to kill him and his entire coven. In Soulmate, Hannah discovers that she has been reincarnated over and over, only to always die before her seventeenth birthday at the hands of the world's first vampire, Maya. Each of these three novels brings the reader of this series closer to the revolution that will forever change the world of the night in which witches and vampires thrive.

In Dark Angel, Gillian is walking home from school a short time before Christmas when she hears a voice calling from the frozen river. When Gillian goes to investigate, she accidentally falls in. Although Gillian is able to escape the cold water, the snowy weather quickly forces her into hypothermia and she begins to die. When Gillian's spirit reaches the next world, she is met by a guardian angel who gives her the choice of living or dying. When Gillian chooses to live, she discovers that the angel has come back with her to guide her into a better life.

Gillian's guardian angel teaches her how to dress better and how to deal with the kids at school, quickly transforming Gillian into a popular girl. When a couple of other girls threaten Gillian's popularity and the future of her boyfriend, the guardian angel tells Gillian she is a witch and helps her cast a spell over the girls. When the spell leads to one girl nearly losing her fingers, Gillian begins to question the validity of her guardian angel. Gillian turns to the only person she feels she can trust, another witch. This girl tells Gillian that her guardian angel is more than likely a soul with unfinished business who is using her to regain his life. Gillian sets out to find out what this business is, eventually learning that the soul is really a cousin she never knew she had who accidentally killed a young girl while experimenting with magic. Gillian finds the girls body and helps her cousin find forgiveness.

In The Chosen, Rashel saw her mother killed by a vampire when she was only five and has devoted her life since to killing vampires. One night, while teamed up with a group of other vampire hunters, Rashel meets Quinn, a powerful vampire with a deadly reputation. However, rather than kill Quinn, Rashel speaks with him and discovers an uncanny connection to him. Rashel lets him go despite the outrage of the other vampire hunters and realizes the next time she sees him, she must kill him.

Rashel later stumbles onto a slave ring being run by Quinn to collect up human girls for use by vampires and witches. Rashel arranges to have herself kidnaped by Quinn and allows him to transport her to his client, a unknown vampire who has called together all the leaders of the made vampires to stage some sort of coup against the vampire council. However, as she is attempting to free the other human girls and hunt down the unknown leader, Quinn stumbles across her. Rashel and Quinn discover that they are soulmates and decide to work together. Unfortunately, they are not prepared when they realize that the unknown leader is both Quinn's adopted father and the murderer of Rashel's mother. A fire breaks out, killing most of the vampires and allowing Rashel and Quinn to escape.

In Soulmates, Hannah begins seeing a psychiatrist because of weird notes she has been writing herself without her conscious knowledge about some unknown danger that will come before her seventeenth birthday. With the use of hypnosis, Hannah becomes aware that she has been reincarnated multiple times and that she has been in love with the same guy all those times. When Hannah meets Thierry, she discovers that he is vampire who has been awaiting her return for many, many years. However, there is a strange, dark haired woman who tells Hannah that Thierry kills her in every one of her reincarnations.

Hannah eventually has a clear memory of the dark haired woman and discovers it has not been Thierry who has killed her past selves, but the woman, Maya. Hannah goes to Thierry, but is kidnapped by Maya. When Thierry comes to rescue Hannah, they try to convince Maya to stop their feud, but instead Hannah is forced to kill Maya.

More summaries and resources for teaching or studying Night World No. 2: Dark Angel; the Chosen; Soulmate.