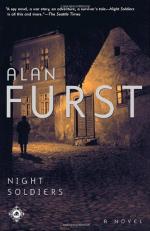 Related Topics
A Hero of France
Midnight in Europe

Alan Furst
This Study Guide consists of approximately 38 pages of chapter summaries, quotes, character analysis, themes, and more - everything you need to sharpen your knowledge of Night Soldiers.

This detailed literature summary also contains Topics for Discussion and a Free Quiz on Night Soldiers by Alan Furst.

Night Soldiers, by Alan Furst, is the fictional story of a group of Soviet trained spies who attend espionage training in Moscow, form a secret bond signified by BF 825, then follows their lives from pre-World War II to the months immediately after the war's end. The story centers on the main character, Khristo Stoianev.

Khristo is nineteen years old and living in Vidin Bulgaria when his brother is kicked to death by a local fascist militia. Soon afterwards, Khristo decides to leave the village where he was born and travels to Moscow with Antipin, a Soviet espionage agent and recruiter.

At the school, Khristo is placed in a unit with several other agents. The men form a bond, naming themselves BF 825, which refers to a training exercise where their unit, 8, should have been named the winner.

Khristo's comrades are Kulic, Voluta, and Goldman. These men are trained in espionage and counterintelligence and are manipulated by their teachers in cruel and horrifying ways. The men become cold and jaded through their experiences, but feel a bond towards each other. Khristo realizes through a series of events at the school that he is irrevocably trapped as a Soviet agent, and that he cannot go home again, cannot trust anyone, and cannot ever escape.

When Khristo is sent into the field, his partner is Sascha. Sascha and Khristo are assigned to work with a man named Andres in Spain, who is feeding information to the Soviets regarding several anarchist groups in Madrid. Madrid is under siege. Sascha is recalled to Moscow because his supervisors are not pleased with his production. Sascha is tortured and then sent to Siberia for a thirty-year sentence. Khristo is directed to get more information out of Andres, or he will face a similar fate. Khristo works with Goldman and Andres on several missions within Madrid. During this time in Madrid, Khristo meets Andres's American girlfriend, Faye Berns, and is impressed with her.

Khristo and Andres are betrayed by the Soviets, but alerted in time by Kulic so they can escape. After a long and difficult journey, Khristo ends up in France. Andres and Faye end up in another part of France. He believes he is finally free from the Soviet grip. He becomes a waiter at an elegant and popular dining club in Paris.

Khristo cannot hide the fact that he is a man set apart from other men because of his training and experience in killing. His headwaiter is a savvy Parisian man who has also emigrated from Bulgaria, and he taps Khristo to become involved in a scheme to steal gold from the Soviets in Paris. The plan is executed well until Khristo stops being involved in it, then it falls apart quickly.

Khristo falls in love with a woman named Aleksandra, and as the Soviets begin hunting down the members of the Bulgarian scheme, Aleksandra is kidnapped from Khristo's apartment. He never sees her again. There is a brief reunion with Faye Berns, who tells him Andres died and that she is on her way back to America. Khristo is arrested through a deal between the English and French secret services, and begins a life term in French prison. While there, he receives a letter from Faye, saying she is re-entering her life in America. A letter from Goldman indicates he will do what he can to save Aleksandra, but Khristo is never to see her again.

While Khristo is in Paris, Sascha is working his way up from laborer to clerk in the Siberian gulag. Kulic is fighting for the Soviets, but is soon betrayed and set up to be killed. Voluta has escaped from the Soviets and is aiding Poland as a Roman Catholic priest. Goldman is working his way through the ranks of the NKVD.

Robert Eidenbaugh, an American in New York City, is recruited to work for the OSS. He is sent to France, where he is assigned to work with the local resistance fighters.

After three years in prison, it is late in the War, and Khristo receives a cryptic message from BF 825. A few nights later he is led from the prison by a priest and begins his escape from France. Along the way he befriends two sisters, who are running away to a small cottage in the mountains of France. He joins them and is safe from pursuit for a few months. Khristo is never truly able to disguise the fact that he is a trained killer, and is soon recruited by the local resistance to join their group, under Eidenbaugh's command. Eidenbaugh receives his direction from a man named Ulysse. The resistance group wreaks havoc for the Germans in the area of Cambras, France, and later Ulysse pulls the most qualified men to ramp up the espionage and sabotage in an area close by.

One night the team is betrayed, and all but Khristo and Eidenbaugh are killed in a violent attack. Ulysse decides it is time to send Eidenbaugh to America and Khristo to Switzerland.

Goldman has lost favor with the Soviets and is now in charge of interviewing political prisoners in Siberia. There he meets Sascha, who has compiled a large detailed cache of information about Soviets and is willing to give this information to the Allieds in return for freedom. Sascha threatens Goldman with revealing the BF 825 conspiracy, so Goldman arranges for Sascha to be transferred to a prison where he can easily escape. Word is sent to Voluta, who is exhausted and in Poland.

Khristo is sent to Prague to gather information there for the OSS. Khristo finds Prague to be horribly dirty and depressing, and he begins to lose his way. One day he is contacted by the BF 825 network and is informed that he is needed to retrieve Sascha for the OSS. During a set up meeting for Khristo and Voluta, Voluta is murdered and Khristo must flee Prague.

Khristo's flight from Prague involves walking hundreds of miles and near starvation. Finally he makes a connection with a defecting German soldier and is able to move down the river faster by rowboat. As the rowboat drifts by a partially sunken barge, Khristo sees BF 825 painted on the side of it. This leads him to Kulic, who is managing a group of resistance fighters. Through Kulic's connections, weeks later Khristo is at the town where Sascha is supposed to be retrieved by the Americans.

Khristo goes into the old church where Sascha is hiding, and Sascha accidentally shoots him. Sascha commandeers a taxi and the two men are able to meet up with the American contact and are both flown to freedom.

A few months later, a ship lands in New York, and Khristo steps off. There to meet him is Faye Berns.

More summaries and resources for teaching or studying Night Soldiers.