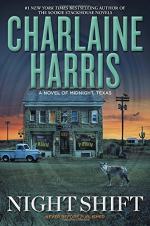 Charlaine Harris
This Study Guide consists of approximately 59 pages of chapter summaries, quotes, character analysis, themes, and more - everything you need to sharpen your knowledge of Night Shift.

This detailed literature summary also contains Quotes and a Free Quiz on Night Shift: A Novel by Charlaine Harris.

The following version of this book was used to create this study guide: Harris, Charlaine. |Night Shift. Gollancz, 2016. Kindle Edition.

As the narrative begins--told by an omniscient narrator--a man commits suicide at the crossroad and the residents of Midnight gather to discuss what is going on. They think that it is the first suicide, but Lem, who works at the pawnshop at night, tells them that there was one before. Fiji realizes that she knew the victim and did not particularly like her. The residents feel that magic is somehow involved because even the ghosts in the town have been acting strangely. Lem realizes that he has to finish the translation of the books he has been reading quickly as he thinks they hold the key to the suicides.

Bobo goes to see Fiji the next morning to ask her whether she would like to go on vacation with him. She is slow to answer as she is trying to figure out whether he is really suggesting that just the two of them go on vacation. This is what she has been hoping for. He crushes her though when he, misinterpreting her slow response, adds that they can stay in separate rooms. This addition to the invitation makes her think that he is not interested in her romantically and never will be, so she decides to stop pursuing him. She also decides that she needs to be tougher.

Then Fiji’s sister, Kiki, comes. She says that she has left her husband and wants to stay at Fiji’s for a while. Fiji wishes she would leave, but feels that she has no choice but to agree that she can stay because she is family. Quinn also comes back to Midnight as he has a break and misses his son, Diederik. While Kiki is there, another woman who made Fiji mad attempts to commit suicide and a character from the first novel in the trilogy returns and kills himself. His death receives media coverage and when Kiki pretends that she lives in Midnight and implies that strange things happen there, Fiji asks her to leave as she is harming the town.

While all of this is going on, Manfred finds out that a friend of his who lives in an elderly care home is talking about going to the crossroad in Midnight. He asks Fiji whether she can do anything to help the woman. Fiji agrees to try and goes to the home to see her. Manfred substitutes for her during the day, but leaves after business hours, and Kiki has already left, so there is a period of time when the house is empty. When Fiji returns, she finds Teacher there and realizes that he has broken in and searched her house. She decides to take care of the situation herself and casts a spell on him to give him momentary pain.

This is not the first thing Teacher has done that is suspicious and Olivia concludes that he and Madonna are there to watch her. It turns out that she is correct, but they are not there to harm her. They are there to protect her from her father’s right hand man, Ellery who is working against her father and wants her killed. The residents realize this when Ellery comes with a team to kill Olivia and the rest of the residents to hide the fact that Olivia was the target. Teacher comes out to protect Olivia. However, it is Fiji who saves her, even though Ellery does shoot Olivia. Once they realize Madonna’s and Teacher’s roles, the community welcomes the couple.

In the midst of all of this, Lem finds a vampire, who he has to later kill in self-defense, to help him translate the book he has been working on. Fiji hears the voice that lures people to the crossroad and realizes that it has been trying to seduce her by killing people who mean to do her, or have done her, harm. She works to keep it from getting people and animals start going to the crossroad instead.

Lem gets the translation just as Manfred discovers that the man who has come to take over the Gas N Go is his grandfather and part demon. The voice and the cause of the suicides is his great-grandfather who was banished 250 years ago and is now waking up. In order to stop him from rising, the town’s members have to perform a ritual that involves a virgin losing her virginity at the crossroad and her blood being spilled. As Fiji is the only virgin in town, she is the one who has to do it. When the time comes, Bobo steps forward. With the help of her magical powers, she defeats the demon. She and Bobo become a couple, Olivia hears from her father, Manfred starts dating a girl who works part-time at the elderly care home, and Madonna and Teacher decide that they want to stay in Midnight and really concentrate on making the restaurant profitable.

More summaries and resources for teaching or studying Night Shift: A Novel.