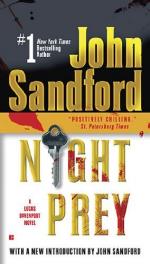 This detailed literature summary also contains Topics for Discussion and a Free Quiz on Night Prey by John Sandford.

Night Prey, by John Sandford is an exciting tale, illustrating how the the investigating team of Lucas Davenport and Meagan Connell are pitted against the serial killer, Robert Koop. The novel twists and turns as Davenport and Connell struggle to identify the killer as Koop's control slips and he spins out of control.

Lucas Davenport has returned to the Minneapolis Police Department as a Deputy Chief, appointed by the Chief, Rose Marie Roux to assist the department in high profile cases and keep the media at bay. Lucas is happy to return after running a computer company for the past few years.

Lucas is tossed into the fray almost immediately as he is called to scene of a vicious murder. Harriet Wannemaker has been found violently murdered, tossed in a dumpster. Lucas arrives at the scene and is introduced to Meagan Connell, a state investigator who has been causing some problems with various police departments. Connell is convince that the murder is the work of a serial killer, and has been struggling to get someone to recognize the fact. Chief Roux asks Lucas to work with Connell, as Roux wants to run for office and the agency that Connell is involved with has a lot of political pull. Lucas agrees, and though the two butt heads occasionally, they work well together, following the few clues they have to track the killer they seek.

Robert Koop is a killer as well as a cat burglar. Koop is good at what he does, meticulous and careful whether he be burgling or killing. Things change the day he enters the apartment of the sleeping Sara Jensen and becomes infatuated with her. Frustrated by his inability to be with the woman he loves, Koop escalates the murders he commits, stepping outside his normal pattern. Lucas and Meagan step up their investigation, following the path of the killer, but usually two steps behind him.

Koop's infatuation leads to his downfall, though many are killed along the way. As Koop's obsession grows, he spends his evenings perched on the air conditioning unit across from Jensen's apartment, spying on the woman he believes he is connected to. His sexual frustration as well as his personal gratification at being so smart can sometimes lead to the deaths of others. The evening Koop sees Sara in the arms of another man leads to his complete loss of control. Angry at Sara and her boyfriend, Koop strikes out, letting his normal carefulness slide as he attacks Evan Hart in broad daylight in front of Sara's building.

Lucas and Connell meet Sara and are able to draw the connection between the break-in at her apartment and the killer Robert Koop. Connell struggles to stay well enough to catch the killer, as she is dying of cancer. In an act of desperation, Lucas and Connell have Sara Jensen act as bait, knowing that Koop is going to snap and come after her at some point.

Koop does, but not the way the police anticipate. Entering the building from the balcony, Koop takes Lucas and Meagan by surprise, attacking Lucas and almost incapacitating him. Meagan intervenes, using her own body as a weapon, and the two struggle. The end result of the struggle is that Koop and Connell topple over the edge of the balcony and plummet to their death. Lucas can never be sure if Connell's death was an accident, or if she had given her life, knowing it was ending anyway, in order to assure that Koop would never kill again.

Lucas recovers from the physical injuries he obtains the night of Meagan Connell's death, but memories of her still haunt him. Despite this, or possibly because of Meagan's determination in catching a killer she had tracked, Lucas moves on in life, his own determination evident as he puts the case behind him and moves forward, onto the next puzzle.