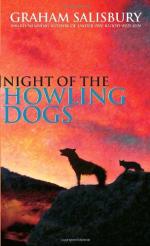 Graham Salisbury
This Study Guide consists of approximately 27 pages of chapter summaries, quotes, character analysis, themes, and more - everything you need to sharpen your knowledge of Night of the Howling Dogs.

Night of the Howling Dogs Summary & Study Guide includes comprehensive information and analysis to help you understand the book. This study guide contains the following sections:

This detailed literature summary also contains Topics for Discussion on Night of the Howling Dogs by Graham Salisbury.

Dylan bikes to Casey's house to load up his dad's Ford van with the gear their Scout troop will need for their long awaited hike to a secluded beach below Hawaii's famous mountain volcano, Mauna Loa. Casey Bellows is Dylan's best friend and Casey's Dad, a Hilo Police detective and an ex-marine, is the troop's Scoutmaster. Dylan's Dad, we learn, is a big-ship skipper who sails the world's oceans. He's rarely home and because of this Dylan's relations with his father are somewhat strained. Dylan is tall and strong but he wears thick glasses and he fears the other boys may think of him as a sissy. Although he does not know it, this trip to the volcano will provide him with an opportunity to prove in no uncertain terms that he is a man.

They pick up the other lads, Sam, Zach, Tad, Mike and his Dad and Billy, and finally, a new member of the troop, Louie Domingo, a charismatic loner. A streetwise alpha male, Louie refers to Dylan as haole (white boy) and an instant conflict develops between Louie and Dylan, a conflict that will be aggravated and ultimately resolved as the story progresses.

When they disembark at the volcano Dylan spots two dogs, one dark, one white, moving like ghosts through some tall weeds in the distance, an ominous sign that will prove to be significant.

The troop hikes to Halape, a secluded beach where they meet a friendly shark named Fred and a shaman-like paniolo (Hawaiian cowboy) named Masa who tells them about the legend of Fred, the friendly shark, and about the two dogs. The white dog, he informs them, is Pele, a shape-shifting ancient Hawaiian goddess who lives in the volcano. "When she gets angry she shakes the earth," he says, "and the ground opens up and fire comes out." Reverend Paia, the assistant scoutmaster, tells some spooky stories around the campfire, and Dylan again sees the dogs, and this time they are howling. Things are starting to get eerie and Dylan is thoroughly spooked.

Dylan's apprehension is well founded, we learn, because a couple nights later the boys are jarred out of bed by a seven point two earthquake which sets the stage for a tsunami that sweeps away the camp and scatters the troop far and wide. It falls Dylan's and Louie's lot to rescue the others and as they work together against great odds their personal conflict is resolved. "I am going to stop giving you a hard time now," Louie says. "You know why? You got guts, that's why." Then, to top things off, Dylan's Dad arrives in a Coast Guard chopper and the boys are airlifted out. The savage ordeal is over at last, but Dylan, Louie and the others will never forget what they shared at Halape.

More summaries and resources for teaching or studying Night of the Howling Dogs.

Night of the Howling Dogs from Gale. ©2005-2006 Thomson Gale, a part of the Thomson Corporation. All rights reserved.