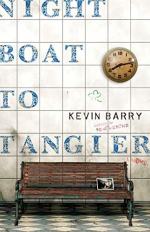 Kevin Barry
This Study Guide consists of approximately 35 pages of chapter summaries, quotes, character analysis, themes, and more - everything you need to sharpen your knowledge of Night Boat to Tangier.

This detailed literature summary also contains Quotes and a Free Quiz on Night Boat to Tangier by Kevin Barry .

The following version of this book was used to create this storyline: Barry, Kevin. Night Boat to Tangier. New York: Doubleday, 2019.

The novel opens at the Fort of Algeciras, Spain in the year 2018. Maurice Hearne and Charlie Redmond are two men in their early fifties; they are originally from Cork, Ireland. They believe that Maurice’s 23-year-old daughter, Dilly Hearne, may be arriving soon on a boat from Tangier. She estranged herself from them three years prior and went to live an itinerant life in Spain. Maurice and Charlie hope to make contact with her when she arrives, as she does not know that they are there. The novel then shifts back to the mid-1990s. Maurice was in a long-term relationship with an Irishwoman named Cynthia. Maurice and Charlie lived in Ireland, but they made contact with a woman in Spain named Karima. With Karima’s help, Maurice and Charlie established a illegal business secretly importing heroin from Spain to Ireland. Maurice soon began to have a secret sexual relationship with Karima.

The narrative then shifts back to Maurice and Charlie in Algeciras. They discuss life, and Maurice says that there are only seven things that can distract a person form the underlying horror of life and death: love, grief, pain sentimentality, avarice, lust, and a desire for death. The narrative then summarizes the events of the mid-to-late-1990s In Maurice and Charlie’s lives. They continued to operate their illegal drug importation business, with Karima as their main contact in Spain. Cynthia gave birth to Dilly. Maurice tried to be a good father, but he and Charlie soon became highly addicted to drugs. By the end of the 1990s, their business began to experience significant obstacles and difficulties, especially as Maurice and Charlie’s addictions increased and their self-control decreased.

Once again, the narrative then shifts back to Maurice and Charlie in Algeciras. Maurice talks about his father and about his experiences as Dilly’s father. Maurice always wanted to be a good father, but various factors such as drug addiction made it difficult to be a good parent. Maurice also had sex with other women, which caused much instability in Maurice and Cynthia’s relationship when Cynthia found out.

Dilly arrives in Algeciras by boat. She is surprised to see Maurice and Charlie at the port; she purposely avoids being seen by them.

The novel returns to the port of Algeciras for its final scenes. Dilly decides to leave without interacting with Maurice and Charlie. Maurice and Charlie catch a glimpse of her as she leaves. They console each other that Cynthia looked strong, healthy, and confident, and that she would probably be fine on her own. Maurice and Charlie continue to take solace in their mutual friendship, and they exchange words of hope for the future.

More summaries and resources for teaching or studying Night Boat to Tangier.