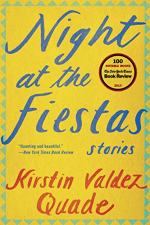 Quade, Kirstin Valdez
This Study Guide consists of approximately 51 pages of chapter summaries, quotes, character analysis, themes, and more - everything you need to sharpen your knowledge of Night at the Fiestas.

Night at the Fiestas Summary & Study Guide includes comprehensive information and analysis to help you understand the book. This study guide contains the following sections:

This detailed literature summary also contains Quotes and a Free Quiz on Night at the Fiestas by Quade, Kirstin Valdez.

The following version of this book was used to create this guide: Valdez Quade, Kirstin. Night at the Fiestas. Kindle edition

Night at the Fiestas is a collection of short stories exploring family relationships, growing up and the hopes and dreams of the characters. Valdez Quade investigates the themes of coming of age, race and identity, belonging, isolation and the desire for transformation.

Nemecia, Family Reunion and The Manzanos are all written from the perspective of young girls. Nemecia is told in the first person following Maria’s childhood. Maria struggled with feeling like she belonged in her family and always felt over shadowed by her cousin Nemecia. She struggles with her identity once she no longer has Nemecia’s attention. This drives her to audition for the head of the Corpus Christi parade. Having this role bestowed on her, she is overjoyed until Nemecia steals her role. She is sent to live with her great aunt for a few months after she has an angry outburst and returns home once Nemecia moves to California. In the Manzanos, Ofelia narrates her story in the present tense. She talks about her life with her grandfather and recalls the day when her mother left her and moved to Santa Fe. Ofelia and her grandfather go shopping in Santa Fe and see a woman that looks like her mother. On the drive back home, Ofelia’s grandfather reveals that he had abused her grandmother one time which is why she had left him. In Family Reunion, the narrator follows an atheist Claire, an 11-year-old girl. Claire struggles to fit in due to all her peers being Mormons. Claire is delighted to go away on a camping trip in a church with her friend Morgan and Morgan’s mom. However she realizes that she misses home while she is away when the trio doesn’t go as planned.

In Mojave Rats, Night at the Fiestas and Old Sins, the main characters are desperate to change their lives. Monica is bored and lonely living in the desert. She is frustrated when the heating breaks in her trailer as they are far from help. She has a difficult relationship with her daughter from her first marriage, six-year-old Cordelia. She is anxious about her husband’s pursuit of his PhD, worried that it will take longer than expected and that she will be stuck in the desert forever. In Night at the Fiestas, 16-year-old Frances is anxious to start her life as an adult and have adult experiences. On the bus she finds money left on the seat from an artist she had been talking to. She decides to keep the money when she bumps into him again, planning for her future. Nancy is upset by her younger cousin’s ease in social situations. An ease which she does not have. She is disappointed when her night does not end with any adult experiences. In Old Sins, a young, pregnant Crystal regrets her decisions and her pregnancy. Working in a church as a receptionist was not her long term plan but she has been forced to stay out of her need for money. She dislikes one of the priests, Father Paul as she thinks he is judging her. She worries that she will not be a good mom and wishes she had her old life back.

In The Five Wounds, Amadeo wants to prove himself in his role of Jesus. He knows he does not have much to be proud of in his life and believes this will transform him. When his 15-year-old daughter unexpectedly arrives, he is upset, believing her presence will ruin his opportunity. Once he acts out the role of Jesus, carrying the cross, he knows he has the strength to be nailed to it. While being nailed, he sees his daughter and realizes that she will have a hard life. Margaret in Canute Commands the Tides also wants to transform her life. She moves to the outskirts of Santa Fe desperate to work on her art. She wants to get closer to her housekeeper, Carmen and her housekeepers granddaughter, inviting them to stay the night. The peaceful night is interrupted when Carmen’s son arrives, brandishing a gun.

In the Guesthouse, Jeff returns to take care of his grandmother’s funeral and sell her house. He is alarmed when he finds his estranged father living in his grandmother’s guesthouse with a pregnant snake. His father attempts to convince Jeff that his grandmother had wanted him to live with her, however Jeff has a difficult time believing this and is angry that he did not know his grandmother as well as he thought he had.

In Jubilee, Audrey goes to the party of her dad’s wealthy boss. Her plan is to get revenge on Parker, the daughter in the family. She is angered that Parker had never tried to include her or be her friend. She makes Parker uncomfortable, talking about how she was stopped from picking blueberries as a child because she was Mexican. When she hears from Parker’s dad’s girlfriend that Parker had attempted suicide, she runs over to Parker relating the story back to her and trying to embarrass her.

More summaries and resources for teaching or studying Night at the Fiestas.

Night at the Fiestas from BookRags. (c)2022 BookRags, Inc. All rights reserved.