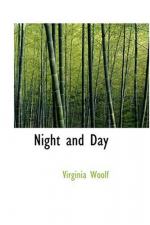 Related Topics
A Room of One's Own
Between the Acts
Flush: A Biography
Jacob's Room
Kew Gardens
Moments of Being
Mrs. Dalloway
Orlando: A Biography
The Duchess and the Jeweller
The Mark on the Wall
The New Dress
The Voyage Out
The Waves
Three Guineas
To the Lighthouse
Virginia Woolf
Jacob's Room: Novel
The Voyage Out: A Novel
The Years
The Death of the Moth
Street Haunting
Mr. Bennett and Mrs. Brown
Craftmanship

Virginia Woolf
This Study Guide consists of approximately 56 pages of chapter summaries, quotes, character analysis, themes, and more - everything you need to sharpen your knowledge of Night and Day.

Night and Day: A Novel Summary & Study Guide includes comprehensive information and analysis to help you understand the book. This study guide contains the following sections:

This detailed literature summary also contains Quotes and a Free Quiz on Night and Day: A Novel by Virginia Woolf.

The following version of this book was used to create this study guide: Woolf, Virginia. Night and Day. Penguin Books, 1992.

The novel follows 25-year-old Katherine Hilbery, a beautiful and privileged member of a historically renowned family, as she navigates the options available to young, single women in late nineteenth century England. Set primarily in London, the story features a number of characters from the upper and middle classes of English society.

One of these working middle class characters is Ralph Denham, a lawyer in his thirties whom Katherine meets at the beginning of the novel during a tea party her family is hosting. Ralph and Katherine do not start off on good terms as he criticizes her for her privileged position and accuses her of not understanding the value of labor. Yet, in the days following their first meeting, Ralph cannot get Katherine out of his mind. He admits that he noticed something different about her that he isn’t used to seeing in members of the social elite, and this mysterious quality of Katherine’s continues to draw Ralph to her.

Katherine and Ralph continue to meet in a number of circumstances, one of which is a meeting of literary scholars at a room owned by Mary Datchet, Ralph’s close friend. Mary is also a single woman in her twenties who works as a secretary for the Suffrage Office in London. The author positions Mary as a counterpoint to many of the other women in Katherine’s life, notably Katherine’s mother, Mrs. Hilbery, who believe that marriage is the only option for a woman in Katherine’s social position. As Ralph and Mary continue to spend time together, however, Mary starts to wonder if she would prefer marriage to work, and realizes quickly that she is falling in love with Ralph. Meanwhile, Katherine becomes engaged to William Rodney, a well-to-do poet of whom Katherine’s family heartily approves. As Mary and Katherine cross paths, each woman becomes interested in the lifestyle of the other and wonders what an alternative path may look like.

During the Christmas season, all of the characters travel to the English countryside: Ralph and Mary to stay with Mary’s family, and Katherine to stay with the Otways, relatives of hers who share the famous ancestry of her family. Over the course of a few days, many relationships start to change: Ralph proposes to Mary but she rejects him, knowing he is in love with Katherine, and William Rodney comes to understand that Katherine does not love him after all. When the characters return to London, a number of seemingly solidified bonds are in flux. Eventually, Mary Datchet moves on from her love for Ralph and thrusts herself into her work at the Suffrage Office while Katherine notices that Rodney has been particularly interested in her cousin, Cassandra Otway, ever since their return from the country.

Soon, Katherine and Rodney end their engagement as Rodney begins to court Cassandra with Katherine’s blessing. The author makes a point to note that this type of romantic musical chairs is frowned upon by Katherine’s well-off extended family, and throughout the latter half of the novel we hear more and more from Katherine’s older, more traditional aunts. Katherine, however, continues on her own path, eventually coming to the realization that she is in love with Ralph Denham. After the news of Cassandra and Rodney’s engagement and Katherine and Ralph’s relationship breaks, it is up to Mrs. Hilbery to ensure that all of the young lovers end up with the people they’ve chosen. The novel concludes with the engagement of Rodney and Cassandra, the engagement of Katherine and Denham, and the proud independence of Mary Datchet who continues to work toward women’s suffrage and a more progressive English society.

More summaries and resources for teaching or studying Night and Day: A Novel.

Night and Day: A Novel from BookRags. (c)2022 BookRags, Inc. All rights reserved.