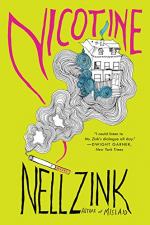 Nell Zink
This Study Guide consists of approximately 37 pages of chapter summaries, quotes, character analysis, themes, and more - everything you need to sharpen your knowledge of Nicotine.

This detailed literature summary also contains Quotes and a Free Quiz on Nicotine: A Novel by Nell Zink.

The following version of this book was used to create the guide: Zink, Nell. Nicotine. HarperCollins, 2016.

Nell Zink's novel, Nicotine, is written from the third person point of view, and in the present tense. Though the novel is neither divided into sections or chapters, the narrative follows a largely linear structure.

When Amalia is 13, she runs away from home. Shortly thereafter, Norm Baker discovers her in a dump in Cartagena, Colombia. Noticing her need, he invites her into his family. Her presence, however, complicates the Baker family dynamic. Amalia and Norm's eldest son, Matt, soon begin a distorted sexual relationship. Troubled by these new stressors, Norm's wife, Katie, runs off. Despite Norm's efforts to find her, Katie never resurfaces. Norm's second son, Patrick, does not recover from his mother's disappearance.

Sometime later, Norm moves the family to the States, where he marries Amalia. They later have Penny.

Not long after Penny graduates from college, Norm becomes gravely ill. Devoted to her father, Penny stays by his side almost constantly. After he dies, she struggles to cope. Norm was the only person who seemed to understand Penny, and their relationship gave her a sense of security.

The day after his memorial service, Penny visits Norm's childhood home despite her family's warnings. She discovers a band of anarchist squatters living in the house, which they have named Nicotine. Instead of telling them Nicotine belongs to her family, she decides to join their group. She is especially taken by one of the residents, Rob. Convinced he is interested in her, she starts sleeping over in his bed every night. However, Rob does not want sex. Penny is deflated. She though a shallow physical relationship might make her feel better.

Despite her frustrations, she remains in the community. The other Nicotine residents, Jazz, Sorry, Tony, and Anka, encourage her to move into another Community Housing Action, or CHA, house called Tranquility. Shortly thereafter, Penny leaves her father's old Manhattan apartment and joins the Tranquility family.

As time passes, Penny's relationships with the anarchists and her family become increasingly complex. Matt's new entanglement with Jazz bothers Penny. Rob's continued resistance to her romantic offers makes her irritable and lonely.

Then one night, Matt becomes angry with Jazz and storms Nicotine. His altercation with the Nicotine residents becomes violent and raucous. The house is so wrecked afterwards, Jazz, Rob, and Sorry flee town and start driving west.

When Penny discovers her friends are gone, she feels even more depressed and alone. Her mood worsens when she learns that Matt is turning Nicotine into the Norman Baker Center. Eventually she realizes she needs to find a job and become more independent. After securing a position at the bank, she flies to California to visit her friends. During the trip, she and Rob discover how much they love each other and make plans to return to Jersey City together.

Not long after Matt opens the Norman Baker Center, he disappears to Hawaii in search of Jazz. He agrees to let Penny have the house, and she and Rob move into the apartment about the community center.

More summaries and resources for teaching or studying Nicotine: A Novel.