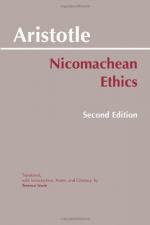 Aristotle
This Study Guide consists of approximately 44 pages of chapter summaries, quotes, character analysis, themes, and more - everything you need to sharpen your knowledge of Nicomachean Ethics.

This detailed literature summary also contains Topics for Discussion and a Free Quiz on Nicomachean Ethics by Aristotle.

Aristotle's Nichomachean Ethics begins with a simple premise, which is that everyone wants to be happy. The best way to become happy takes up much of the rest of the work, as Aristotle examines the nature of happiness what sort of actions lead to it. He is not solely interested in happiness for the individual, but also for the community. Aristotle concludes that to be truly happy one must live a virtuous life, and he discusses several specific virtues and how they are best realized. At the root of all virtue, he claims, is the decision to be virtuous. This decision is based on understanding and reason. Study, he concludes, is the most important activity, then, for it leads to understanding and ultimately to the greatest form of happiness. Aristotle concludes his work with a proposal to examine how political systems affect the virtue of their citizens in order to construct a system that would best serve its members by encouraging and enforcing a life of study, virtue and happiness.

Aristotle begins his work with a discussion of happiness and suggests that it is the highest good that all people strive toward. To be truly happy, he claims, one must be in a state of complete virtue. Doing virtuous actions is not enough. They must be done in the proper state of mind and for the proper reasons. He also determines that acting virtuously is voluntary, that people are responsible themselves for their character and their actions.

Aristotle examines several specific virtues such as bravery, generosity, temperance and truthfulness. Each of these character traits exist in a spectrum, with conditions at either extremes corresponding to the excess or deficiency of the trait. The excess of bravery, for example, is rashness. The deficiency of bravery is cowardice. The goal of the virtuous person should be to maintain an intermediate position between the extremes. He calls this position the "mean."

These means are not the same for each person, but are relative to the character of each person. Each person must possess the prudence to know which direction he must move in order to get closer to the mean. He must also use correct reason to inform his decisions, and aim in all things toward the goal of complete virtue, not simply for short term goals. Correct reason ultimately comes from understanding, and for this reason, Aristotle concludes that a life of study is the route to the greatest happiness. He completes his work with a return to the subject of happiness, which he has shown is brought about by a complete virtuous life guided by reason and understanding.

More summaries and resources for teaching or studying Nicomachean Ethics.