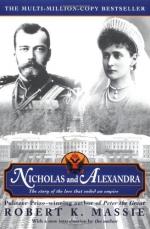 Robert K. Massie
This Study Guide consists of approximately 61 pages of chapter summaries, quotes, character analysis, themes, and more - everything you need to sharpen your knowledge of Nicholas and Alexandra.

This detailed literature summary also contains Topics for Discussion and a Free Quiz on Nicholas and Alexandra by Robert K. Massie.

Nicholas and Alexandra by Robert K. Massie is a book about the last Russian tsar, Nicholas II. Many people say that Nicholas was in the wrong place in history at the wrong time. He had the style and training to be a nineteenth century European ruler, but instead he was the tsar in twentieth century Russia at the time that the Russian empire was falling apart due to the pressures of the revolutionaries. The revolution brought the monarchy to an end in Russia, a very violent end; with any member of the Romanov family found murdered, as Lenin felt it was necessary.

This book traces the life of Nicholas II. Nicholas II was raised to be Tsar even though he wasn't ready for the role when it was cast upon him. He had just become engaged to Alexandra and married her soon after his father's death so he didn't have to face the role of Tsar on his own. She stood by his side then and for their entire lives. Alexandra was a German princess who thought she became thoroughly Russian but was never accepted by the Russian people. This became evident during and after the revolution.

The downfall of the Romanovs was a peasant holy man name Gregory Rasputin. He became know for his faith healing ways and this is how he became known to the Empress who had one son, the Heir Apparent, who suffered from hemophilia. Whether or not Rasputin performed the miracles they claimed he did is open for discussion, but he was the advisor that Alexandra turned to. When Nicholas went to live at military headquarters during World War I to lead his troops, Alexandra was left in charge of civil administration and Rasputin became her advisor, recommending men who would leave him alone and let him pursue his goals. This resulted in Alexandra being distrusted and hated by the population and eventually led to a member of the nobility leading the plot to murder Rasputin.

However, the murder of Rasputin could not save the monarchy. The revolution was too far advanced and there was too much hatred and distrust of the Romanovs. Nicholas received bad information that led him to downplay the seriousness of the revolution when it began. He stayed at the Stavka with his troops, telling the government in Petrograd to put a stop to the street violence. By the time he realized the significance and seriousness of the situation, it was too late. The Duma was sitting with the Soviet and a Provisional Government was in effect. It was thought that if Nicholas abdicated in favor of his son that they could save the monarchy but Nicholas foresaw the fact that he and Alexandra would have to leave the Russia, leaving Alexis behind and this he refused to do.

There are a lot of "ifs" regarding the fate of the Romanovs. If they had left the country when they could have, etc. The fact is that the hated Rasputin resulted in the end of the monarchy and this book tells the story of the Romanovs and how this happened.

More summaries and resources for teaching or studying Nicholas and Alexandra.