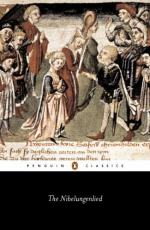 Anonymous
This Study Guide consists of approximately 112 pages of chapter summaries, quotes, character analysis, themes, and more - everything you need to sharpen your knowledge of Nibelungenlied.

This detailed literature summary also contains Further Study and a Free Quiz on Nibelungenlied by Anonymous.

The Nibelungenlied is a German epic poem which was written sometime around 1200, probably in what is today Austria. The title means "Song of the Nibelungs." "Nibelungen" is the plural of "Nibelung," which refers to a dynasty which is conquered by the hero or protagonist of the epic, the dragon-slayer Siegfried. The word "lied" means "lay," which is a Germanic word for a song, poem, or lyric. The poem exists in more than thirty manuscripts, but three main versions represent the story as we know it. For the purposes of study, many modern editions are translated in prose rather than rhymed poetic form to be more accessible to students.

Reasons why the Nibelungenlied has enjoyed such a wide readership for so many centuries include: much is known about the historical context of the poem as well as about the literary sources it drew on, including mythology and legend. The story is one of heroes, romance, courtly manners, deception, and revenge. It has been enjoyed by many readers for its literary techniques and for its adventurous qualities and complex characters as well.

The Nibelungenlied combines elements of many different historical, legendary, and mythological tales. The legend of the Nibelungs arose from the historical destruction of the Burgundian kingdom on the Rhine River by Etzel's army of Huns (later identified in legend with the army of Attila the Hun) around the year 437. Many other characters in the Nibelungenlied have some historical basis as well.

Gunther was King of Burgundy, and Dietrich is thought to be based on Theodoric the Ostrogoth, who was King of Italy in 493. The events in the poem, however, were altered and combined with other legends when the story was first written down for a medieval audience around 1200.

The Nibelungenlied and the legends it was based on existed in oral form long before it was ever written down. A version of the Nibelungenlied was first translated into modern German in 1757 under the title of Kriemhild's Revenge. Many more versions followed, but no English translation appeared until 1814. The first complete English prose version appeared in 1848. There have been many more, in both prose and verse form.

The Nibelungenlied, as an epic, celebrates the achievements, adventures, and battles of several heroic figures. It also encompasses elements of the romance genre as well, and includes tales of knights, courtly behavior, and chivalry. The Nibelungenlied draws on history, mythology, and legend for its details. It encompasses themes such as heroism, feudalism, justice and revenge, honor, loyalty, deception, dreams, and the importance of "keeping up appearances."

The "meaning" of the Nibelungenlied is difficult to determine. It does not have a clearly-defined moral message for the reader. However, it raises important questions about the nature of loyalty, honor, and what constitutes tragedy. It also attracts study and commentary purely on the basis of its accomplished literary features, such as its structure, character development, and the use of foreshadowing. The Nibelungelied poet combined disparate material and stories into a comprehensive whole that captures modern readers no less than audiences of eight hundred years ago.

More summaries and resources for teaching or studying Nibelungenlied.

Nibelungenlied from Gale. ©2005-2006 Thomson Gale, a part of the Thomson Corporation. All rights reserved.