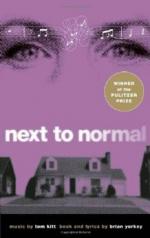 Next to Normal Summary & Study Guide

Next to Normal Summary & Study Guide includes comprehensive information and analysis to help you understand the book. This study guide contains the following sections:

This detailed literature summary also contains Topics for Discussion and a Free Quiz on Next to Normal by Brian Yorkey.

This acclaimed musical, winner of several of Broadway's prestigious Tony Awards as well as the Pulitzer Prize, is the story of a family traumatized by death and struggling with issues related to the mental illness of one of its members. As it explores aspects of the power and function of memory, the work also considers thematic questions relating to the nature and value of loyalty and the need for hope in the face of adversity.

As the musical begins, it quickly becomes clear that as Diana, her husband Dan, and her daughter Natalie enact their daily routines, they are each struggling with issues that make those routines a struggle. Diana is hyperactive, Dan tries hard to remain patient with her, and Natalie feels unloved and avoided. In the midst of all this is Diana and Dan's son Gabe, who seems more connected to Diana than anyone else. It soon becomes clear that for some time, Diana has struggled with bipolar disorder, that Dan feels it's time for her to change her medication, that Natalie wishes there was some way that she could get out of this situation, and that Gabe, in a surprising revelation, is dead. His presence is, in fact, a delusion primarily experienced by Diana but which, over the course of the narrative, interacts with the other characters as well.

Diana's first doctor experiments with a new drug regime that, after a few unsuccessful attempts, calms her down but numbs her experience of feeling. In the meantime, Natalie begins a relationship with Henry, a "stoner" guy at school who gets past her initial resistances and treats her with wisdom and respect. Eventually, Diana tires of being numb all the time and, with the encouragement of the ghostly Gabe, flushes all her medications down the toilet.

Diana then starts working with another therapist, Dr. Madden, who first prescribes hypnosis in which Diana's memories of Gabe's death begin to come to the surface and then, when neither hypnosis nor talk therapy appears to be doing her any real good, electroshock therapy. At first, Diana is powerfully resistant, feeling like Gabe is being taken from her. Natalie is unhappy about the idea of such a violent treatment, but Dan eventually convinces Diana to give it a chance.

After receiving the treatment, Diana's memory is erratic, and her family struggles to keep being patient as she herself struggles with putting the pieces of her memory back together. Meanwhile, Natalie pushes Henry away, and Dan becomes more insistent that Diana's memories about Gabe remain locked in her mind. Eventually, however, those memories push their way to the forefront of Diana's mind, and she remembers not only that he died when he was a baby, but she also realizes that because she grieved for him so intensely for so long, she has neglected Natalie. Her attempts to bridge the distance between them eventually result in a tentative reconciliation. Meanwhile, Diana is also realizing just how much of a role Dan has recently played in trying to keep her memories of Gabe suppressed, and realizes she has to leave him in order to come to grips with her past, and her memories of Gabe, on her own terms.

As Diana prepares to leave, Natalie opens herself to the relationship with Henry and Dan opens himself to his own memories of Gabe along with his own guilt about what happened to him. As the musical comes to an end, all of the characters join together and sing about the importance and value of hope, and of letting its light "shine" in the darkness of despair and fear.

Next to Normal from BookRags. (c)2022 BookRags, Inc. All rights reserved.