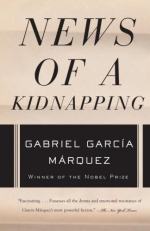 News of a Kidnapping Discussion Questions

Many reviewers have said that News of a Kidnapping is a piece of nonfiction that reads like a novel. Do you agree? Why or why not?

Find out about the current situation in Colombia. What is the status of the drug trade and what is its relationship to the United States?

García Márquez, as well as his reviewers, have pointed out economic benefits that the Colombian drug trade brought to the country. Find out more about these economic effects as well as the drug trade's effects on society in general. Analyze the cost benefit of the drug trade for Colombia.

In the 1980s, both Colombia and the United States declared a War on Drugs. Find out about the American "war" and compare the two.

García Márquez has played a significant role in the politics...