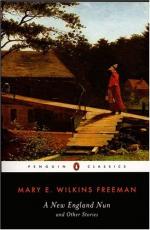 Anonymous review of Freeman's second collection of short stories which praises their realism and her "economical" writing style.

A feminist/psychoanalytic interpretation of some of Freeman's short stories. Of particular note is Donovan's theory that the death of a mother figure is a major recurring theme in Freeman's works.

Hicks, Granville. "A Banjo on My Knee," in his The Great Tradition: An Interpretation of American Literature since the Civil War, Macmillan Publishing Co., 1935, pp. 32-67.

Marxian-influenced commentary upon Freeman's place in the local color tradition.