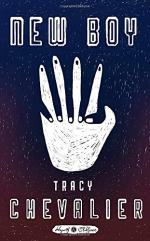 Chevalier, Tracy
This Study Guide consists of approximately 44 pages of chapter summaries, quotes, character analysis, themes, and more - everything you need to sharpen your knowledge of New Boy.

The following version of this book was used to create this study guide: Chevalier, Tracy. New Boy. Hogarth Shakespeare, 2017.

On a warm May morning in 1974 Washington, D.C., Dee was on the playground waiting for school to start. Then she saw the new boy, a surprise at the end of the school year who stood out as the only black child on the playground. Dee couldn’t help but stare at him as she fetched her friends Mimi and Blanca to join her in Mr. Brabant’s class line. Waiting to enter the school, she stood behind him nervously. To her shock, the new boy turned around and spoke to her, introducing himself as Osei “O” Kokote, the son of a Ghanian diplomat. She was immediately charmed by his formal, accented voice.

Ian was bullying younger children when he noticed O. He was upset at the sight of him, a black boy disrupting the fragile playground hierarchy, and grew furious when he saw O speaking with Dee. When his friend Rod approached, whining as usual about his crush on Dee, Ian said they would have to do something to put a stop to O. Meanwhile, his reluctant girlfriend Mimi watched Dee and O in awe. They seemed to have a magical aura around them, much like the kind she would see before her frequent, painful headaches.

As O surveyed the playground, he was disappointed but unsurprised to realize he was the only black student. In the past several years, he had lived in Rome and New York City, each time facing racist prejudice. However, as he spoke with Dee, he realized he might have an ally at the school. When she agreed to switch her Snoopy pencil case with his embarrassing pink strawberry one, he was delighted.

At morning recess, Mimi and Blanca listened as Dee gushed about her crush on O. Mimi, unhappy with Ian and jealous of Dee’s affection for O, warned her that kids would make fun of her if she went out with a black boy. Dee brushed her off to watch O play kickball. O loved sports, and he knew that playing well would make him well liked among the boys. When he kicked a homerun, albeit out of bounds, popular boy Casper congratulated him. However, when Dee hugged him, the other children were shocked by her physical crossing of racial lines. Wanting to get away from their judgmental peers, Dee led O to the more isolated sand pit. O told her about his adventurous life, first in Ghana and then around the world. Their affection for each other grew, and they touched hands to each other’s cheeks. They were interrupted when the furious Mr. Brabant yelled at them for inappropriate touching. Ian was equally enraged by the sight of their caresses, and as recess ended he began to think up a complex plan to undermine the new boy as well as the other popular children at his school.

When the lunch bell rang, Mimi had a horrible headache. On her way out she was waylaid by Ian, who wanted something of Dee’s for an undisclosed reason. She didn’t have anything, but after she left for the cafeteria, she saw Dee’s strawberry pencil case fall from her bag and picked it up.

Meanwhile, O was facing the eternal first day problem of with whom to sit at lunch. To his surprise, both Casper and Ian offered him a seat, and he chose to sit with the friendlier Casper. After he had eaten, he went out on the playground. Ian joined him and pointed out Dee, who had returned from lunch at her home and was feeding Casper a strawberry. Ian implied there was something between the two, causing O to feel a surge of jealousy. This pleased Ian, but he knew he needed to push O farther to make him truly suspicious of Dee and Casper. He told Rod to rile Casper into punching him by saying something nasty about his girlfriend Blanca, and Ian watched from afar as his plan was put into action. Oblivious to Ian’s shady dealings, Dee was shocked by the punch, and even more surprised when O refused to listen to her defense of Casper. Back in class, she realized her pencil case was missing, and she nervously lied to O that she had left it at home.

At the start of afternoon recess, Mimi pulled Ian aside and gave him the strawberry pencil case on the condition that he agree to breakup. He agreed, and quickly came up with a plan for it. While playing the outfield in kickball, he approached Blanca and told her the case was a gift from Casper, who might be gone for a long time if he was suspended. Blanca was delighted, and at the first opportunity Ian approached O to point out that she now had the case. O was visibly upset. When Dee approached him, she was so shocked by his anger with her that she wanted to cry. She tried to ask what was wrong, and he shoved her hard so that her head cracked on the asphalt. O was immediately ashamed of what he had done. The teachers rushed to the scene, but Dee lied for him, saying she had tripped. Mimi took her to the nurse’s office, where Dee cried, confused by her beau’s change of heart.

During art class, O asked Dee to meet him on the playground after school. Before she met him, she went to check the Lost & Found box for the strawberry pencil case, with no luck. Meanwhile, Ian was lurking around the playground. He spotted O on the jungle gym and took the chance to place even more doubt in his mind, implying that Dee went with both Rod and Casper, and was only trying out things with O because he was different. When Dee approached O on the jungle gym, he was even angrier with her. When he pointed out the pencil case and told Dee what Ian had been saying, Dee realized that Ian had been stirring up trouble and went to confront him. However, before she could call out the bully, O began screaming at her from the jungle gym, calling her terrible names and saying she was easy so that the whole playground could hear. Dee was mortified and ran sobbing from the playground.

Mimi approached O and demanded an explanation. However, as she climbed up the jungle gym to join him, she fell from the rungs. Ian had realized that she would give him away, so he had pulled her down. Mimi was in terrible pain and couldn’t move. The children all began screaming and their teachers rushed to the scene. Suddenly understanding what had happened, Mimi explained that Ian was to blame for everything. Mr. Brabant, however, immediately blamed O for the drama and Mimi’s fall, revealing his barely hidden racism. Defiant, O raised his hand into a fist and jumped from the jungle gym, joining the possibly paralyzed Mimi.

More summaries and resources for teaching or studying New Boy.