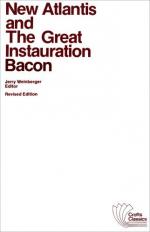 Francis Bacon
This Study Guide consists of approximately 23 pages of chapter summaries, quotes, character analysis, themes, and more - everything you need to sharpen your knowledge of New Atlantis ; and, the Great Instauration.

This detailed literature summary also contains Topics for Discussion and a Free Quiz on New Atlantis ; and, the Great Instauration by Francis Bacon.

Francis Bacon (1561-1626) ranks among history's greatest scientific and philosophical minds. He was a famous lawyer, statesmen, historian, and one of history's greatest defenders of modern science. Bacon's stated goal in his philosophical life was to destroy the then dominant philosophy of Scholasticism or the philosophy of the followers of 13th century Roman Catholic philosopher, Thomas Aquinas, which Bacon believed led intellectuals to debate pointless matters, ignore the importance of observation for learning and, in general, not contribute to the progress of science.

New Atlantis and The Great Instauration are two of Bacon's great historical works aimed at achieving his goal. The New Atlantis is a fictional narrative that demonstrates much of Bacon's high place in English literature's history and the development of English prose in the 17th century, whereas The Great Instauration is an explicitly philosophical and scientific, non-fiction work. The two are combined in the present book.

The Great Instauration is composed of two parts, the first presented to King James in 1605 and the second appearing in 1620. The piece is the great and short statement of what is often called 'Baconian' philosophy. The Great Instauration is a systematic plan for a complete revolution in learning and intellectual reform. Initially intended as a massive treatise, the work was never finished but istill had a major impact. The published work is merely an outline divided into six parts: (i) the division of the sciences, (ii) the new organon or directions concerning the interpretation of nature, (iii) the phenomena of the universe, (iv) the ladder of intellect, (v) the forerunners of Bacon's view and (vi) his new philosophy. The first part describes the divisions of science in Bacon's time and suggests that there are further branches that should be added. Part two developed a new method of scientific inquiry which is, in effect, an early sketch of the scientific method. It contains a new epistemology, ontology, and form of logic. The logic is intended to understand and command nature and not to win arguments. It is inductive.

The subsequent parts were never completed. Part three was meant to contain a history of nature and experiments about nature. Part four was intended to link natural history and Bacon's new science. Part five discusses forerunners of his new philosophy and emphasizes that the larger plan of the Instauration will take a long time to complete. Part six was to contain a detailed description of Bacon's new philosophy.

The New Atlantis is effectively a work of utopian fiction published in 1624. Bacon introduces an Atlantis-like island called Bensalem, whose inhabitants are unusually well-behaved, chaste, scientific and civilized. The narrator, a sailor on a boat with others that land on the island due to a storm, describes the great generosity and enlightenment of the people. However, the narrative is largely a shell meant to build up the introduction of the Father of Salomon's House, a priest who is in fact a modern scientist. Salomon's House, a house of research and science created thousands of years ago, contains a coterie of scientists of many types. The Father's long description of the activities of the house represents Bacon's extraordinary vision of the modern research university centuries before its time. The New Atlantis is subject to many interpretations however, and there is no settled view about Bacon's complete intent in the latter work.

More summaries and resources for teaching or studying New Atlantis ; and, the Great Instauration.