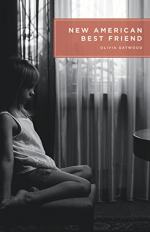 Olivia Gatwood
This Study Guide consists of approximately 46 pages of chapter summaries, quotes, character analysis, themes, and more - everything you need to sharpen your knowledge of New American Best Friend.

New American Best Friend begins with a series of poems in which the speaker finds herself dealing with the complexities of puberty as a young girl. “Jordan Convinced Me That Pads Are Disgusting” and “The First Shave” see the speaker learning about her developing body, while “Ode to Elise in Eighth Grade Health Class,” “Bubblegum or Bruise,” and “Like Us” depicts her navigating social expectations and the emergence of her own sense of sexuality.

The book then transitions to a set of poems that describes the speaker’s move from Albuquerque, New Mexico to Trinidad. “Port of Spain, 2002” offers a montage-like series of snapshots as she adjusts to her new life on the island. “The Only Thing I Brought From America” and “Dry Season, 2003” examine how her American identity becomes interwoven with her developing sense of self, and how her new relationships and landscape simultaneously impact and become impacted by this.

In the third section of the book, the speaker finds herself deeper into her teenage years, still struggling with many of the same issues related to societal misogyny and complex relationships. In “Backpedal” she looks back on the untimely death of an acquaintance, while in “The Autocross” she illustrates sexism and disrespect she dealt with as a female racer. “Fourth Week of Two-A-Days in July” portrays the duality of girlhood relationships, and in “The Summer of 2008 at Altura Park” we see the speaker dealing with toxic masculinity and infidelity.

The final set of poems at the end of the collection addresses some of the broader societal issues that underlie the first several sections of the book. Poems such as “Manic Pixie Dream Girl Says” attack depictions of women in popular culture. Infidelity and toxic relationships crop up again in “The Anthem I Have Sung,” “The Ritual,” and “The Scholar.” This final section is also marked by a series of odes, ranging in subject from underappreciated garments, such as “Ode to the Wedding Dresses in Goodwill” and “Ode to My Period Underwear,” to the challenging of misogynistic language, such as “Ode to the Word Pussy” and “Ode to My Bitch Face.” Gatwood concludes the collection with “Ode to the Women on Long Island,” a final poem that praises the strength and vivacity of certain women in her life and celebrates them as people, for all of their flaws and virtues.