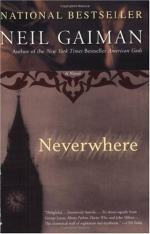 This detailed literature summary also contains Topics for Discussion and a Free Quiz on Neverwhere by Neil Gaiman.

Londoner Richard Mayhew stops to help an injured girl and becomes lost in a shadowy parallel world, London Below. The girl, Door Portico, is on a mission to find out who murdered her family, and reluctantly Richard goes with Door on a quest to solve the mystery. Through many trials, they finally discover that an angel, Islington, is responsible, and they manage to send Islington off into a faraway realm. Door sends Richard back to the normal London, but soon he realizes he must return to London Below.

After Richard stops to help the injured Door, he soon finds himself forgotten by the world. Friends fail to recognize him and cabs ignore him. With Door's pursuers, Croup and Vandemar, now harassing him, Richard seeks out Door in hope of finding answers. Richard soon learns that he now walks London Below, a world of things lost or forgotten. A feral group of rat-worshipers calling themselves "the rat-speakers" helps Richard reach the Floating Market, where Richard finds Door recruiting for a bodyguard.

Door is determined to discover who murdered her family. Her investigation turns up her father's video diary. The recording urges Door to seek out the angel Islington. Still clueless and largely in denial, Richard joins Door's growing entourage as she visits the senile earl of Earl's Court, who presides over a small medieval court crammed entirely within the confines of a single subway car.

The earl directs them to the Angelus, an exhibit in the Museum of London. After some difficulty, Richard and Door gain access to the device, and Door, using her supernatural ability to "open" objects, creates a door to Islington's Citadel. They are dumbfounded to meet a real-life angel. Islington explains that they must bring the key currently possessed by the Black Fryers.

The group travels to the abbey of the Black Fryers, where each of them must undergo an ordeal. Richard's ordeal is the most difficult of all, as he must endure visions born from his own fear and doubt. Richard perseveres, however, and the key is won. Unfortunately the Angelus can only be used once. To return to Islington, they must take a longer path.

On the way back to Islington, traveling down the cavernous and winding Down Street, the group is betrayed when Hunter, Door's seemingly infallible bodyguard, allows Croup and Vandemar to kidnap Door. Hunter redeems herself, when she, guilty over what she has done, serves as bait for the Great Beast of London, allowing Richard the honor of killing it with her magical spear. Hunter dies soon after.

Richard makes his way to Islington's citadel, but he and the marquis, the only other hope for Door's rescue, soon join Door in chains. The villainous angel Islington explains that it had Door's family killed when Door's father, also an opener, refused to help it escape from its prison. Only an opener can use the key to Islington's cell.

Though initially uncooperative, Door pretends to open the angel's cell. Instead, she opens a doorway to a far-away place of high gravity. The angel, Croup, and Vandemar are all sucked through the doorway. Some time later, a tearful Door uses the magic key to send Richard home. Richard, however, is restless in London Above and eventually returns.