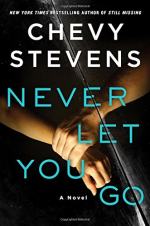 Chevy Stevens
This Study Guide consists of approximately 62 pages of chapter summaries, quotes, character analysis, themes, and more - everything you need to sharpen your knowledge of Never Let You Go.

This detailed literature summary also contains Quotes and a Free Quiz on Never Let You Go by Chevy Stevens.

In the novel Never Let You Go by Chevy Stevens, Lindsey Nash and her daughter Sophie think their lives will be better if Andrew, Sophie’s father and Lindsey’s abusive ex-husband, would just disappear. It is not until he is found dead in their house and they realize he was right when he suggested someone else was causing problems for them that they recognize Andrew is not the only person of whom they should be afraid.

When Lindsey first met Andrew, she believed their lives together would be perfect. After just a few months together, Andrew’s abusive and jealous personality began to surface. He insisted that Lindsey quit her job and work with his company, he did not want her to go out and see friends, and he got angry with her when her car broke down and she got a ride from a mutual friend. Andrew additionally kept track of the miles she drove in her car, and had video cameras he could watch from work that covered most of the house and property. When Andrew drank, he behavior was even worse. He often hurt Lindsey physically while drunk. He always apologized and promised to change afterward.

It was after Andrew knocked Lindsey across a coffee table that she decided she needed to leave for her safety and for the safety of their six-year-old daughter, Sophie. When she talked to Andrew about getting a divorce, he threatened to kill her. She tried to sneak Sophie out of the house one night after Andrew had passed out from alcohol. He would have strangled Lindsey to death if Sophie had not woken up and seen what he was doing.

Lindsey told her brother, Chris, what Andrew was doing to her. Chris helped Lindsey come up with an escape plan that included adding sleeping pills to Andrew’s alcohol to ensure that he could not wake up and follow Lindsey. Afraid she might kill Andrew, Lindsey decided to give him only two pills instead of three. After Lindsey and Sophie safely escaped from the house, Andrew woke and came looking for them. He crashed his truck into another vehicle, killing the woman driving. Because he was at fault in the wreck and had been driving while impaired, Andrew was sentenced to serve ten years in jail.

While Andrew was in jail Lindsey and Sophie made a life for themselves in the town of Dogwood Bay. Their peace is threatened when Lindsey sees Andrew at the bank. He tells her that he is moving to Dogwood Bay and that he knows that she drugged him the night of the wreck. Lindsey is not aware that Sophie had been in contact with Andrew before he got out of jail and that they have met in secret. Lindsey suspects Andrew is harassing her when she finds that someone has placed her car keys on top of her purse, like Andrew once did, at a house where Lindsey is cleaning. Lindsey next comes home to find that someone has been in her house and read her emails. Andrew also leaves a gift of a CD of their wedding songs on Lindsey’s car. During their meetings, Sophie has warned her father that if he wants their relationship to continue, he has to stay away from her mother. When Lindsey and Sophie’s dog is poisoned, Andrew is blamed. Sophie cuts him out of her life and Lindsey moves them to stay with a friend. When they visit their rental house to get some of their things, Lindsey and Sophie are shocked and grieved to find Andrew dead in their house. The death is ruled accidental and they try to put their lives back together.

Meanwhile, Lindsey has developed a friendship with Marcus Copeland, a man she met through her women’s support group. Lindsey and Sophie even stayed with Marcus for a short while after Andrew was found dead. As Lindsey and Marcus spent time together their friendship turned to love. Lindsey and Sophie stayed spring break week with Marcus at his lake house. After Marcus asked Lindsey to move in with him permanently, she felt she needed to tell him the truth about the night that she had run away from Andrew, that she had given him sleeping pills in the hope that he would not catch them leaving. Marcus seemed to take the information calmly and told Lindsey she should not feel guilty for what she had done. He tried to convince her that Andrew had made his own decision to get in the car.

As she cleaned the house later that day Lindsey began to get curious about Katie, Marcus’ daughter. Marcus had told her that Katie had been killed by a possessive boyfriend. When Lindsey went into the bedroom Marcus said was Katie’s, it became clear it was not a young woman’s room. Lindsey found a book with the name Elizabeth Kathryn Sanders in it. This was the name of the woman killed by Andrew the night of the traffic wreck. Lindsey realized that Marcus had manipulated her into falling in love with her and believed he wanted to kill her. She realized he was the one who had killed Andrew. Later that night Marcus knocked Lindsey unconscious with a flashlight. When she woke up he was preparing to leave. He said Elizabeth had just learned she was pregnant when she was killed. They had been trying desperately to have a baby. He told her that he was going to set the house on fire with her inside. Lindsey managed to escape with the help of Sophie and Sophie’s boyfriend, Jared. Marcus, ironically, was the one who died in the fire. Police investigation found that Marcus had been following and taking notes about Lindsey, Sophie, and Andrew for some time. Police determine that Marcus had planned to kill Lindsey, Sophie, and Andrew from the moment he first found them.

More summaries and resources for teaching or studying Never Let You Go.