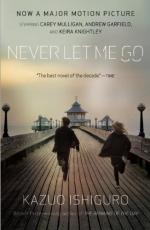 Kazuo Ishiguro
This Study Guide consists of approximately 34 pages of chapter summaries, quotes, character analysis, themes, and more - everything you need to sharpen your knowledge of Never Let Me Go.

This detailed literature summary also contains Topics for Discussion and a Free Quiz on Never Let Me Go by Kazuo Ishiguro.

Never Let Me Go is a science fiction novel about three friends who grow up together in England in the late 20th Century. Kathy, Ruth and Tommy attend an exclusive boarding school called Hailsham that has an unusual emphasis on encouraging physical fitness and artistic expression. It is gradually revealed to the reader that the students of Hailsham are actually clones being raised to donate their organs. After completing their schooling, the three friends are sent to live in communal housing with other clones before entering the final stage of their lives when they will become "carers" for other clones who are beginning the process of donating their organs, and then finally begin to donate their own organs until they "complete."

Told from the viewpoint of Kathy, who becomes a carer for her two friends, the manipulative Ruth and the hapless Tommy, the novel is a narrative of how the three young people learn about one another and their place in the outside world. Ruth and Tommy become a couple, even though it is Kathy and Tommy who seem to have the more natural attraction. Years later, when Ruth is a donor and Kathy her carer, Ruth confesses that she had intentionally kept Kathy and Tommy apart out of her own jealousy and selfishness and she asks Kathy for her forgiveness. She encourages Tommy and Kathy to get together and encourages them to seek out Madame, one of the mysterious people connected to Hailsham, to ask her about the rumors that clones who can prove they are in love can postpone their donations.

After the death of Ruth, Tommy and Kathy seek out Madame and find her living with Miss Emily, the former leader of Hailsham. The women reveal to them that there is no postponing their destinies and no deferral program exists. Tommy and Kathy also learn that Hailsham, which had since been closed, was created in an effort to demonstrate that clones had souls, which is why the students had been encouraged to express themselves artistically. It had been an experiment designed to demonstrate that clones should be treated humanely, but it was found that society preferred to think of them as sub-human so as to avoid having to confront the ethical issues.

The novel ends after Tommy "completes" and Kathy is left alone to carry on her role as a carer for the final few months until she will become a donor herself.

Never Let Me Go raises questions about mortality and personal identity as the main characters move through life with the ever-present knowledge of their final destinies. Themes of love and personal sacrifice are also explored.

More summaries and resources for teaching or studying Never Let Me Go.