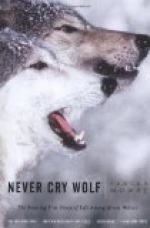 Farley Mowat
This Study Guide consists of approximately 49 pages of chapter summaries, quotes, character analysis, themes, and more - everything you need to sharpen your knowledge of Never Cry Wolf.

In Never Cry Wolf, by Farley Mowat, the author begins by recounting how he expressed an interest in living biology at age five when he first discovered two catfish in a stagnant pond near his grandmother’s home in Ontario. When he completed his schooling, he was engaged by the Department of Mines and Resources to investigate the problems of the decreasing deer population, presumed to have been as a result of an out of control wolf population. Never Cry Wolf is a scientific account of what Mowat discovers as a result of his study of wolves.

Mowat's journey into the world of wolves changes everything he believes and has been told about them and their behavior. Before he leaves for his study, he is told that wolves are decimating the caribou population, killing them indiscriminately for sport. He is also under the impression that they will attack and kill a considerable number of men each year, but they will not touch Eskimo women who are pregnant. Told that wolves number as many as thirty thousand in the region of his studies, Farley expects the population to be thick in the area of his observations, but none of these things are true. The reality he soon learns is that the trappers are killing far more wolves each year to feed their husky teams than the wolves kill – up to three hundred a year each. The wolves, on the other hand, subsist on a diet of mainly mice. They hunt caribou as well, but only take the weak, the injured, or the sick, leaving the caribou stronger for their intervention. They do not kill men, and, in fact, they presented little threat to Farley despite his presence near their den, close to their young and around their food. He even camps near a wolf den to better study them with their pups. Even this close contact doesn’t promote aggression from the wolves. He spends summer and fall following the wolf family around, all without threat to him. The final confirmation of this occurs when he crawls into their den at the end of the season, expecting it to be empty. He comes into face to face contact with the female wolf and one of her pups. She doesn’t so much as growl at him, despite the fact that he had crawled into her den.

On the other hand, hunters and trappers did their level best to kill off as many wolves as possible with the not so silent endorsement of the governments – both federal and provincial. The government provides a bounty for each wolf returned, and encourages safaris that kill entire groups of wolves and caribou with impunity. It is barbaric and unnecessary, but there is no way that he can convince the government of the realities of the situation. Never Cry Wolf is a touching and sometimes heartbreaking account of wolves and the struggles they face.

The hardest realization that Farley faces is the moment when he realizes that had he been armed when he investigated the wolves’ den just before leaving, he might have given in to his fear and actually killed the female and her cub simply because they terrified him in that moment. He understands in that moment that his observations will change nothing.