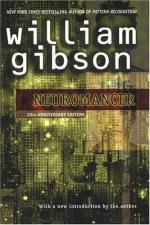 Neuromancer tells the story of a team of criminal experts performing a mission of computer subterfuge against a background of high technology and violent crime. Much of the novel takes place in cyberspace, a computer-created reality.

The first parts of the novel deal with the assembly of the team, Armitage as leader, Molly as hired muscle, Case as computer and cyberspace expert and Peter Riviera to perform the human manipulations which require subtlety as opposed to intimidation. Armitage is an ex-military soldier, while the remaining team members are steeped in drug use and histories of violent criminal behavior. Molly and Riviera are both highly modified individuals, bearing extensive artificial implants and body modifications.

An early, smaller job performed by Molly and Case allows the team to acquire the ROM construct - the recorded personality and intelligence - of McCoy Pauley, a noted and deceased cyberspace operator. It also allows Molly and Case to hone their skills and become accustomed to working together.

The last half of the novel takes place on an orbiting space station known as Freeside, which is the home of the immensely rich, powerful and peculiar Tessier-Ashpool family. Tessier-Ashpool owns two artificial intelligences, self-aware and powerful cyberspace programs. The two artificial intelligences are joined at only a single point, a restricted computer terminal that looks like a bejeweled head, to prevent them from becoming too powerful.

To accomplish the mission, Riviera convinces a member of the Tessier-Ashpool family to let Molly enter their highly secure home to access the restricted computer terminal and enter a password. The password allows Case, with the assistance of the ROM construct and a military-grade computer virus, to penetrate the ice - a set of defensive safeguard programs - that maintains the separation between Wintermute and Neuromancer.

During the mission, Armitage suffers a complete mental breakdown and is killed by Wintermute, and Riviera attempts, unsuccessfully, to double-cross Molly. This attempt ends in Riviera's death. The mission is further complicated by interference from law enforcement agents of the Turing Registry, a shadowy but legitimate international agency tasked with preventing artificial intelligences from growing too powerful. Other twists come from various quarters, including Case's former associates and friends and Neuromancer's attempts to prevent the mission's successful completion.

After overcoming several unanticipated difficulties, Case and Molly successfully complete the mission, allowing Wintermute to merge with Neuromancer. The newly merged artificial intelligence appears to be vastly more than the sum of its parts, though the exact nature of the being is not explored. Case and Molly return to Earth, share a brief relationship and then part ways to continue their lives.