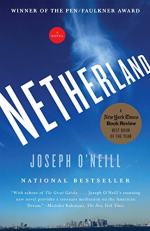 Joseph O'Neill
This Study Guide consists of approximately 45 pages of chapter summaries, quotes, character analysis, themes, and more - everything you need to sharpen your knowledge of Netherland.

This detailed literature summary also contains Quotes and a Free Quiz on Netherland: A Novel by Joseph O'Neill.

The following version of the book was used to create this guide: O'Neill, Joseph. Netherland. Harper Perennial, 2009.

Netherland traces the story of Hans van den Broek, a financial analyst for a major bank and a cricket enthusiast, across a period of social turmoil following the 9/11 terror attacks on New York City (where Hans was living at the time) and of personal turmoil, as Hans' wife Rachel moves away from him in order to gain space from him, taking their son, Jake, with her. The novel focuses on how Hans copes on his own in New York in the years without his wife, primarily by taking part in amateur cricket leagues and befriending a mysterious — and increasingly concerning — man named Chuck Ramkissoon. It is also the story of the death of Chuck, who, it is revealed early in the novel, was murdered not long after Hans left New York.

As told in a series of flashbacks, Hans grew up in The Hague, Netherlands, with his mother, Miriam, after the death of his father in a motoring accident when he was young. Consequently, he was very close with his mother, who watched him play cricket every week and went ice-skating with him on frozen rivers in winter. Miriam also dated a man named Jeroen for a period of five years, but they broke up for reasons that Hans never understood. Hans moved to London as a young adult and grew more distant from his mother, taking up well-paying a job in a major bank. He met Rachel Bolton, and the two married. When, in 1998, Rachel was offered a job as a lawyer in New York, the couple moved to America, where Hans was also able to find work. This is where the events of the novel begin.

Hans and Rachel have a son, who they name Jake. Miriam visits New York for her first and only time to see her grandson, and manages to get lost near Hans' apartment whilst there. Shortly after her return to the United Kingdom, she dies of a stroke, leaving Hans distraught. The 9/11 terror attacks take place a few years into Jake's life, setting off panic and paranoia in the minds of Hans and Rachel, who are forced to move out of their downtown apartment and into the famous Chelsea Hotel during the months after the attacks. Rachel cannot cope with New York and plans to return home, but she also tells Hans that their marriage has been breaking down and she wants time and distance away from him. She takes Jakes and leaves Hans in New York.

Hans begins a period of loneliness in New York, where he remains in the Chelsea Hotel amidst its strange inhabitants. He flies to the U.K every two weeks to see his son, and he begins to play cricket on the alternate weekends to give himself something to do. At his first game, on Staten Island, an aggressive spectator walks on to the pitch with a gun, but he is turned away without incident by the charismatic umpire, who then gives a speech about civility. On the ferry home, Hans bumps into the umpire who is with a young woman; he introduces himself as Chuck Ramkissoon, a businessman, and introduces the woman as Eliza.

A few weeks later, Hans joins his friend Vinay, a food critic, on a tour of immigrant restaurants in Manhattan. They run into Chuck and a friend watching cricket in a bar, and Chuck speaks about himself. He is a first-generation Trinidadian immigrant, and a would-be entrepreneur. He owns a business that deals in kosher sushi, and one that relates to cricket. He swaps business cards with Hans, and, a few days later, sends him a thoughtful gift.

Hans attempts to get his U.S driving license, to give himself something to focus on in his separation from Rachel. When his documents are declined, Hans leaves the Department of Motor Vehicles and stumbles across Chuck's offices. Entering, he finds that Eliza is there, and discovers that she is Chuck's mistress; he is actually married to a woman named Anne. Chuck takes Hans for a drive to Brooklyn, where he shows him a vacant field. Chuck has bought the field, and his great plan is to turn it into a cricket arena, and thus to introduce cricket to America on a large scale.

In the meantime, Hans and Rachel grow further apart, sending Hans into depression. One evening he gets drunk and sleeps with a young Englishwoman he meets in a bar. He also accompanies Chuck to an awards show for New York cricketers, and they stay out drinking all night; the next day they meet Chuck's business partner, Mike Abelsky, who Hans does not trust. Chuck then lets Hans practice driving in his car, and takes him to his Brooklyn home to meet his wife.

Hans becomes more and more suspicious of Chuck in this period. Chuck makes a mysterious stop off at a restaurant in Chinatown to conduct business. He later reveals that he is involved in organizing an illegal gambling ring, focusing on the Trinidadian game "weh-weh." Hans suspects he is hiding further criminal activities from him, but he is happy to enjoy Chuck's company and to play cricket with him, as his own marriage and his work-life worsen.

While visiting his son in London, Hans discovers that Rachel is seeing a man named Martin Casey, a well-known British chef. Hans meets Martin once at a family barbecue, and takes a strong dislike to him, growing jealous of his role in Rachel's and Jake's lives. Rachel goes on to move in with Martin, but moves out again only four months later, Martin having apparently broken up with her.

Back in New York in this period, Hans spends more time than ever with Chuck, but they argue over what Hans sees as Chuck's unrealistic vision for cricket in America. Shortly after, Hans witnesses Chuck and Abelsky roughing up a businessman, and, feeling sickened, walks away from them. He then decides to move back to the U.K to try to save his marriage, a suggestion originally made to him by Chuck. He sees Chuck twice more before leaving: once he waves at him during a Thanksgiving parade, but they fail to meet one another; the last time, Chuck surprises Hans after the latter passes his driving test, and rides with him back to New York. On the road to New York, Chuck reveals details about his murky past, including a story about evading two criminals in the Trinidadian jungle.

Time passes, and Hans is going on holiday to India with Rachel and Jake, and is beginning to feel positively about their marriage again. Hans moves back to London permanently, where he reunites with Rachel properly and buys a new home for his family. He does not hear from Chuck at all. He continues to work for the same bank in London, and he and Rachel see a marriage counsellor to help take control of their relationship, but find that they are now stronger than ever.

Years pass before Hans gets a call telling him Chuck's body has been found in the Gowanus Canal. The NYPD briefly investigate, and Hans makes his own inquiries, but the case is abandoned due to a lack of evidence. Hans cannot get in touch with Anne Ramkissoon nor with Eliza, and so he misses the funeral. He meets one of Chuck's investors in London and discusses Chuck one last time, before acknowledging the fact that he will never know the full truth about Chuck or his death. He moves on with his life with his reunited family.

More summaries and resources for teaching or studying Netherland: A Novel.