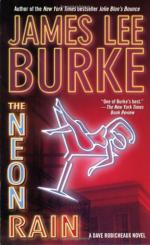 Literary Precedents for The Neon Rain

Burke's The Neon Rain shares elements of both Southern and detective traditions.

Edgar Allen Poe, a southerner, invented the detective story with "The Murders in the Rue Morgue" (1841), although other detective fiction like Mark Twain's Pudd'nhead Wilson (1899) and several works by William Faulkner including Intruder in the Dust (1948) seem more distinctly Southern. Any novel set in Louisiana begs comparison to Robert Perm Warren's All the King's Men (1946), but in this case the comparison seems justified. Both authors investigate, among other things, the extent to which ends justify means and the value of individual relationships in a corrupt world. Burke virtually begs such comparison with his frequent mention of Huey Long and various structures named for him, as Warren based his novel on that Louisiana governor's career.

In fact, numerous critics have noted Warren's interest in, and use of, hard-boiled technique.

Of course, The Neon Rain specifically...