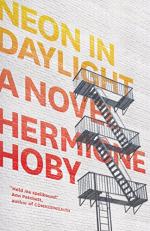 This detailed literature summary also contains Quotes and a Free Quiz on Neon in Daylight by Hermione Hoby.

The following version of this book was used to create this study guide: Hoby, Hermione. Neon in Daylight. Catapult, 2018. Paperback.

Neon in Daylight tells the story of Kate, a British woman in her twenties cat-sitting for a friend of her mother’s in New York; Bill, a once famous novelist now working as a creative writing tutor at NYU; and Inez, Bill’s beautiful and idiosyncratic teenage daughter.

Kate arrived in New York feeling unsure of herself and decided to buy some cigarettes as a prop that would stand-in as a personality trait. In a nearby bodega she saw a striking young woman walking barefoot through the store who purchased some cigarettes and a lighter, before wishing Kate a happy Fourth of July. Kate did not understand what the woman said and, in any case, was too shy and embarrassed to reply. Kate bought the same cigarettes and lighter as the other woman and returned to her apartment where she briefly mistook the Fourth of July fireworks for a terrorist attack.

Inez complained to her friend Dana that she had wished a woman a happy Fourth of July but that she had ignored her. Inez read some strange personal ads on the website Craigslist and told Dana that she was going to reply. Dana urged her not to, telling her it was unsafe, and then left. Inez replied to one of the ads and an hour later found herself standing outside a stranger’s house. Inside, the man tied Inez’s hands together and locked her in his closet. An hour later, he let Inez out and paid her a hundred dollars.

Bill woke up hungover and alone in a park in the middle of the night. He walked for a while before hailing a cab and returning to his apartment where he saw that his daughter was home and already in bed.

Kate went to a park where she saw the woman from the bodega: Inez. Inez mistook Kate for another woman she was arranging to meet and the two struck up a conversation and added each other on Facebook. Kate attended a gallery opening where she met the author William Marrero, who introduced himself as Bill. Bill and Kate went on a date but it was awkward and unsuccessful.

Unaware that she is Bill’s daughter, Kate agreed to meet Inez at a party where Inez convinced Kate to take drugs to make her less embarrassed and inhibited. Afterwards, Kate felt like a new era in her life had begun and she decided she wanted to see Bill again because the drugs had turned her into a new person.

Kate attended a reading Bill was giving to celebrate an anniversary of his one successful novel. Bill noticed Kate in the audience and invited her to have a drink with him afterwards. After several drinks, Bill suggested they should go to a strip club together. At the strip club, Kate felt unhappy and uncomfortable. She took some more of the drugs given to her by Inez in order to feel less embarrassed and more relaxed. Instead, the drugs made her feel more confident about being honest and she told Bill that she wanted to leave the strip club. They went to a hotel and had sex.

Inez replied to other ads on Craigslist making unusual requests, including from a man named Carlos who wanted Inez to shout angry abuse at him before demanding he buy her expensive gifts online. The gifts were later delivered to the coffee shop where Inez worked. One day, Inez became genuinely angry with Carlos and said abusive things that she really meant. This made Carlos very angry and he slapped Inez in the face before demanding that she leave his apartment. Inez gave a pair of expensive high heels that she received from Carlos to Kate. Inez burned Kate’s arm with a cigarette after telling her it was something she used to do when she was younger.

After having sex with Kate, Bill noticed the cigarette burn on her arm and became agitated and concerned because it was something his daughter used to do. On a later occasion, Kate asked Bill about his daughter and realized it was Inez. Kate chose not to mention to either Bill or Inez that she knew both of them.

Both Bill and Inez invited Kate to separate Halloween parties. Kate accepted Bill’s invitation and ignored Inez’s. Kate wore the expensive shoes given to her by Inez when she went to the Halloween party with Bill. At the party, hosted by Bill’s friend Casey, Kate took off the shoes and left them under the couch because they were hurting her feet. At another party, someone invited Inez to come to Casey’s party, but Inez did not know that her father or Kate would be there. After arriving at the party Inez found Kate’s shoes under the couch. Casey unexpectedly committed suicide in front of the party guests by shooting himself in the chest. Inez accused Kate of befriending her in an attempt to get close to her father. Bill followed Casey’s ambulance and Kate took Inez back to Bill’s apartment.

Bill saw Kate lying next to Inez in her bedroom but they did not speak. The next morning, Kate left their apartment without speaking to either of them. She read the newspaper headlines and saw that a major storm had been forecast.